The Duchess of Cambridge returned to the day job after a relaxing holiday on the island of Mustique today – and she looked the picture of health this morning as she attended an official engagement in London, her tiny bump highlighted with a flattering wrap dress. The Duchess, making her first appearance since returning from her break last week – and for the first time at an official engagement with a baby bump.

Despite the frost on the ground, glowing Kate is doing the typical starlet trick of turning up to an event without a coat which is surprising considering she is pregnant and has just returned from a tropical break. Aside from the lack of winter wear and the just-visible baby bump, she’s sticking to classic Kate style – the belted waist, sheer tights and black courts from Episode at House of Fraser (£60) are all looks we’ve seen several times before. 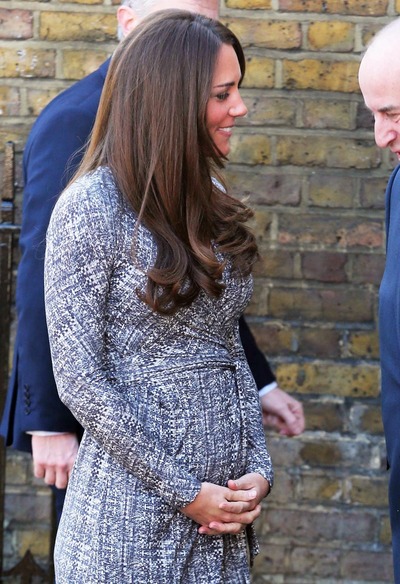 A long-sleeved wrap dress is a sensible wardrobe staple for many working women, just sling it on and you’re camera ready in seconds. It’s the perfect maternity style as it’s not fitted and can be let out as your bump grows. Kate has accessorised hers with a ‘modesty panel’ to keep her cleavage under wraps. This being the Duchess, she’s showing off perfect hair and make-up, but interestingly, she appears to have already said ‘so-long’ to the fringe she recently had cut. Bearing in mind Kate has a hairstyling team at her beck and call, this is proof that bangs are seriously high maintenance!

The Duchess, who was reported to be dismayed after photos of her on the beach in a bikini were published in an Australian magazine earlier this month, looked cheerful and relaxed as she chatted to staff at Hope House, a residential centre in Clapham set up to help recovering addicts. At four and a half months pregnant, she is still remarkably slender apart from her tiny bump – clearly Kate hasn’t been eating for two.