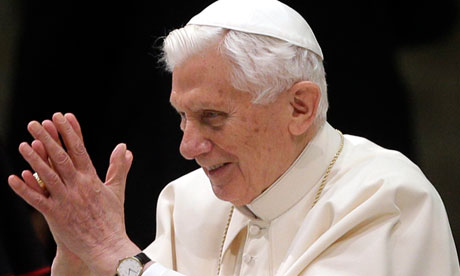 Pope Benedict XVI made his first public appearance on Wednesday since his shock resignation announcement on Monday, asking thousands of cheering pilgrims at the Vatican to “keep praying for me”.

The 85-year-old pontiff was greeted by a standing ovation and chants of “Benedetto”, his name in Italian, at his weekly audience in the Paul VI auditorium, with a prominent banner reading “Thank You, Holiness”.

Benedict, looking drawn and tired but appearing relieved to have put the momentous announcement behind him, said he had made his decision “for the good of the Church” adding: “Keep praying for me, for the Church and for the future pope.”

Wearing his workaday white cassock and skullcap, the pontiff said he could feel the faithful’s love “almost physically in these difficult days”.

Information Nigeria recalls that Pope Benedict XVI is the first to resign voluntarily in 600 years.