The late Nollywood icon, Justus Esiri might have lived by the axiom that a good name is better than silver and gold. 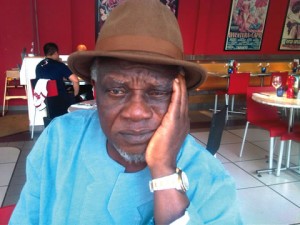 A performer will often take a stage name because his/her real name is considered unattractive, dull, unintentionally amusing or difficult to pronounce or spell, or because it has been used by another notable individual or because it projects an undesired image. Sometimes a performer adopts a name that is unusual or outlandish to attract attention.

Love for motherland, roots and family, strict influence from his German training schooled late Nollywood veteran actor, Justus Esiri, to refrain from taking a stage name throughout his career. For over four decades that he lived and breathed theatre, Esiri stuck to his given names.

It could not have been any different for a man who learned the tricks of the Thespian trade in the conservative and largely discriminatory environment of Germany. He understood the need to retain his identity and not be subsumed by a sobriquet. In the days that Esiri trained in Germany, the Germans were known to be in fierce ideological and philosophical competition with the English-speaking countries of Europe and America. Therefore, any mannerism that tended to give the impression of apeing America was frowned at. American and British entertainers are particularly famous for adopting stage names.

Having attended the Maximillan University, Munich, German, 1964 and Prof. Weners Institute of Engineering, West Berlin, 1967, he was set to become the quintessential Nigerian ‘big man’ on account of his study of engineering. However, in a twist of fate, while working a casual staff at a theatre company in Germany, the acting bug bit him hard. The pull was irresistible. Being one to follow logical steps, he enrolled at the Ahrens School of Performing Arts in1968. For so many years, he was the lone black face in a challenging environment that did not think much of people of colour. Looking back, his resilience to continue with drama in Germany speaks volumes about the toughness of a man who was determined to live out his dream.

Again, coming from a famous Urhobo family in Abraka, Esiri, it must be said that Esiri was already used to certain comfort as his background would reveal. Born on November 20, 1942 in Oria-Abraka, Deltta State, Esiri attended Urhobo College Effurun in the then Bendel State, now Delta State. He was an avid golf player. One of his younger brothers, Prince Albert McCarthy Esiri, is a well-know billionaire industrialist who owns one of the biggest, active polo clubs in Nigeria. Albert Esiri is the CEO of Ashbert Limited; Ashbert Beverages Limited, founder of Abraka Turf and Country Club, Executive Chairman of Ashbert Oil and Gas Limited and other business ventures. He’s played with over 120 ponies. He is the patron/founder of one of Africa’s biggest polo teams, Ashbert Raiders, an award-winning team that has played successfully in major tournaments in Nigeria, Argentina, Brazil and the United Kingdom.

One of his sons, Dr. Sidney Onoriode Esiri is the dentist turned, pop artiste, who is better known as Dr. Sid. Previously signed to the defunct Mo’Hits Records, Dr. Sid’s playful, fun song, ‘Pop Champagne’ shot him into limelight. Another younger brother of his, George Esiri is a famous international photo-journalist who works out of Abuja for Reuters. The fame of his family was also a major consideration for his refusal to take a stage name. Because he valued his name so much, Esiri was never in the news for sordid deeds. In a profession steeped in immorality, it is a glowing statement to his uprightness that his career was scandal free.

The same consideration for his eminent background, informed why Esiri’s illness could not be turned into a pity party, demanding donations to save his soul from public spirited Nigerians. His death last Tuesday at 70 years was, therefore, a shock to millions of Nigerians who connected with him as one of Nollywood’s leading men. This proud family disposition was confirmed midweek when Dr. Sid there was no reason to cry over his father’s demise. He felt the late actor had reached the famed Biblical age of 70 years and lived a good life. It was a clear indication that his funeral will be a celebration of his life (and going by Dr. Sid’s song, it will be an opportunity to pop champagne).

Regrettably though, when his health was beginning to fail, many noticed the drop in his body weight but because he was such a cheerful and courageous man, he did not entertain sympathy or talk suggesting that he was sick. The announcement of his death last Tuesday in a Lagos hospital may not have registered a bang with his close associates and family members who knew that he was battling a terminal illness suspected to be diabetes.

His best known role in television was the Village Headmaster in the then popular television series of the same name. Incidentally, Chief Segun Olusola, creator of Village Headmaster passed on last year. Esiri continued to be active on stage until Nollywood was born. While some of contemporaries treated the emerging Nigerian film industry with some cynicism, Esiri was one of eminent trained Thespians who supported Nollywood with his integrity and credibility. Till the end, he always had faith in Nigeria and did everything within his power to project her in a positive manner.

Unlike some who were never rewarded for their love for motherland, Nigeria did a good turn to Esiri when he was decorated with the Member of the Order of the Niger (MON). Apart from the fact that some of his contemporaries with whom he studied abroad had become highly placed in various walks of life, being inducted into Nigeria’s exclusive company of national honourees also opened a new world of previleges to him.

Appreciating creativity, President Goodluck Jonathan joined other Nigerians in mourning the veteran Nollywood actor, whom he described as an epitome of commitment, excellence and creativity. Jonathan reiterated his belief that Nollywood actors have carved a positive image for Nigeria in the eyes of the international community, with the late Esiri, a Member of the Order of the Niger (MON), having contributed in no small measure to the creation and sustenance of that image. A statement by the president’s Special Adviser on Media and Publicity, Dr. Reuben Abati, said the Nigerian movie industry and the country would miss the actor.

The president extended his sincere commiserations to the Esiri family, the government and people of Delta State and all fans of the late actor. Before the news of his tragic death, the Nollywood great hit the headlines last year for a somewhat gloomy reason. He had been robbed while attending the Olympics in London. His compatriot, Segun Arinze who was resident in the same hotel suffered the same fate. The actors were touring London with ‘The King Must Dance Naked’ and other stage plays.

Unknown to him and many, it would be his last major production. Incidentally, Esiri who began his acting career on stage craved a return to live theatre in his last days. He was said to have been fed up with Nollywood scripts which he did not find challenging. For him, there was nothing more to exploit in Nollywood. It was only natural for Esiri to desire a return to live theatre, a profession that he abandoned a promising career in engineering to pursue.

Apart from the Nigerian national honour, MON, Esiri’s talent, hard-work and consistency was also appreciated in his industry. For these, he was variously decorated with the THEMA Awards, NTA Honours Awards and AMAA Awards, amongst many others. While some treated the emerging Nigerian film industry with some cynicism, Esiri was one of eminent trained thespians who supported Nollywood with his integrity and credibility.

The long array of his performances bears evidence to his versatile talent. The checklist includes: Village Headmaster, Supple Blues and Things Fall Apart. He featured in many Nollywood movies, including I Love Forever, The Prize, Six Demons, Wasted Years, Forever, The investigation, Corridors of Power, Last Knight, The Tyrant and he is reputed to have featured in more TV Network drama programmes than any Nigerian actor.