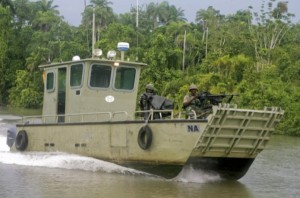 The team leader, Mr. Frank Gbenekama, while briefing newsmen on the operation, disclosed that the illegal refineries were discovered during a routine patrol of the Escravos waterways following a tip-off on activities of pipeline vandals in the area.

“Based on the information made available to us, we decided to embark on a patrol of the Escravos line and in one of the location we sighted some men on board a boat attempting to mount a valve on a trunk-line conveying crude oil. On approaching the vandals, they took to their heels through the bush, leaving behind their boat and other equipment used for the illegal operations,” Gbenekama said.

“It was in the process of tracing the pipes laid through the bush path that we discovered those illegal refineries and we set these refineries ablaze alongside the boat and the equipment used by these vandals in perpetrating their nefarious activities,” he stated.

Mr. Gbenekama therefore promised those behind these acts of sabotage, especially along the Delta Coastal areas a tough time, while he solicited the cooperation of indigenes of various communities along the Delta Waterways in combating the menace of illegal bunkering and pipeline vandalization, as he stressed the need for useful information that could help security agents identify the possible hideout of these criminals.

Gbenemeka also called on the Federal and State Governments as well as government and non-governmental organizations to come to their aid by providing them with logistic supports such as speed boats, ammunitions, manpower and funds to enable them carry out effective policing of the waterways.