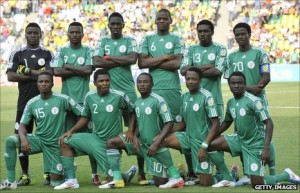 The national U-20 team on Sunday lost to the Eaglets of Mali in the Group B opener of the Africa Youth Championship going on in Algeria.

Following their unimpressive performance against Mali, former Super Eagles handler Christian Chukwu believes the Flying Eagles are well motivated towards making the nation proud in Algeria, and the nation will take no excuses from them should they fail to deliver.

In a chat with Goal.com, Chukwu claimed that the John Obuh boys should be extra motivated by the exploits of the senior national team, the Super Eagles at the Africa Cup of Nations in South Africa.

“We expect the team to do well just as their seniors because they were given everything. They had intensive preparation, played top class friendlies, so all we demand from them is a good result,” said Chukwu, who is a member of the Nigerian Football Federation (NFF) technical committee.

Former Super Eagles goalkeeper Joseph Dosu has not lost faith in the team as he still believes that the John Obuh-led boys have what it takes to defend the trophy they won two years ago.

“If you look at the team Obuh took to this championship, six of the players that were there two years ago are also involved in this one. So, talking about experience, we have it,” said Dosu.

“All we need to do is wish them good luck so that they can get their foot right which will enable them pick the maximum points, and from there forge ahead,” he said.

Dosu however warned against overconfidence which he thinks would be the team’s greatest undoing at the tourney.

“They should not underrate any opponent because they are African champions. All they need do is concentrate well, take their chances as they come, grab as many goals as possible, and with these, our lads will return home as champions,” Dosu concluded.

Nigeria will qualify for the World Youth Championship in Turkey if they defeat Congo DR and Gabon in their next matches.