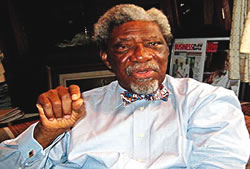 A former Federal Commissioner for Works and Housing, Alhaji Lateef Okunnu, has condemned in very strong terms the planned 100 years celebration of modern Nigeria.
The former commissioner under General Yakubu Gowon’s administration, made this known during an interview he granted to the Vanguard. According to him, it was ‘pure nonsense’ for the government of the country to allow such celebration, which he said was ‘100 years in bondage’.

Alhaji Okunnu said President Jonathan should have left the private sector that brought up the idea of the centenary celebration to handle it alone as, according to him, it is their business and not the business of Nigerians as a people.

“I have never heard of any country celebrating colonialism or the birth of colonialism. Away with it and I really hope that the government would have nothing to do with it. I have heard that the idea came from the private sector. If they want to celebrate the days the British entrepreneurs and the British traders came to Nigeria, that is their business. If they want to celebrate the Portuguese who came before the British, that is their business. But, to me, it’s absolute idiocy,” he said.