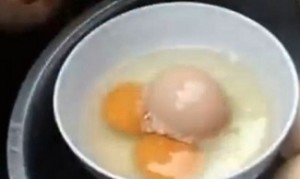 A chicken in China’s Guizhou province has laid a giant egg, according to Hong Kong’s New Tang Dynasty Television.

In news footage villagers can be seen cracking open the huge egg to find two yolks and one full, smaller egg inside.

The chicken’s owner, identified only as Mrs. Yang, thought her animal was dying when it laid the first giant egg, which weighed nearly half a pound.

“The first huge egg appeared about three weeks ago. And there are four to five [oversized eggs] now,” she told NTDTV, adding that she thinks the giant eggs came from the chicken’s rice-only diet. “I’m more than 80 now, but I have never seen eggs like this before.”

Although this chicken’s lay was shocking, other chickens have laid eggs within eggs before.

Earlier this year in the United Kingdom, Sean Wilson’s hen, Rosie, laid an egg that weighed more than 6 ounces, according to the Telegraph. When he cracked it open into a frying pan, he found one yolk and one intact, shelled egg inside.

Douglas Russell, a bird group curator at Britain’s Natural History Museum, says that a double egg is a relative anomaly.

In 2010, a spokesperson for the Guinness Book of World Records told the Telegraph that the biggest hen egg ever laid was a five-yolked egg measuring 12 inches around the long axis, 9 inches around the short axis. It weighed about 12 ounces.

”It was laid by a Black Minorca at Mr Stafford’s Damsteads Farm, Mellor, Lancs, in 1896,” he said.

That said, the largest egg from a living bird weighed 5 pounds, 11.36 ounces, according to the Guinness Book of World Records. It was laid by an ostrich in Sweden in 2008.