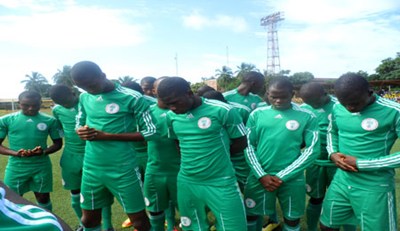 Manu Garba, Chief Coach of the U-17 National team, Golden Eaglets, on Monday said the team was still in progress in spite of thrashing Botswana by nine goals to nothing.

In a statement signed by the team’s spokesperson, Morakinyo Abodunrin, the coach said the team would not rest on its oars.

“First and foremost, we thank God for what we have been able to achieve with this team, but we are not going to rest on our oars.

“This team is still in progress and we pray that God should crown our efforts in the end,’’ Garba said.

On his part, Botswana coach, Kagiso Kobedi, said the experience gathered during the friendly match would be useful to his players during the competition in Morocco.

The Eaglets on Monday walloped the Diamond Zebras of Botswana 9-0 in an international friendly.

The match was the team’s second friendly since the Eaglets resumed camping on Feb. 2 in Calabar in preparation for the 2013 African Youth Championship.

The continental championship will take place in Morocco from April 13 to 27.

It would be recalled that the Eaglets had on Saturday defeated Botwana 3-0 on 12-0 aggregate in three days.

The Eaglets had only a goal to their credit in the first 45 minutes of the game but went on in the second half to score  eight goals in 45 minutes.

The opener came from Musa Yahaya in the 17th minute and further scored a hat-trick in the 60th and 71st minutes.

Ifeanyi Matthew also joined in the hat-trick with goals in 53rd, 65th and 69th minutes.