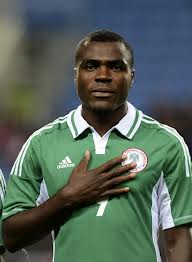 Africa Nations Cup top scorer Emmanuel Emenike has lamented that he is missing the game of football as he remains sidelined by a long-term hamstring injury. The striker cried out on Sunday as European leagues continued on their last stretch for the current season.

“I miss football. Football is part of me and I always want to play,” Emenike told MTNFootball.com on phone from his base in Russia.

The second round of the Russian Premier League will resume this week with Emenike’s Spartak home to closest rivals Terek Grosny.

Both teams are on 32 points after 19 matches with fifth-placed Spartak only ahead on goals’ difference.

Emenike, who fired four goals at the recent Nations Cup, missed the AFCON final against Burkina Faso after he suffered the injury in the semi-final against Mali in Durban.

The medical team at Spartak say he could be out for as long as two months, which could well rule him out of a 2014 World Cup qualifier at home to Kenya later this month. The Spartak medical report came after the original test carried out in South Africa by the Nigerian team had ruled him out for just two weeks. But the reality of sitting on the sideline for a long time is taking its toll on the player’s mind.

On Sunday, Emenike rubbished a media report that he has since returned to action.

“I am yet to return to action, but I am only focusing on good recovery from the injury. I want to get back to my best form for my great club who have stood by me,” said.

“I didn’t post anything about being back in action on Facebook or anywhere else, as I am thinking only about my recovery.

“I hope to be back for good soon.”

In England, his teammate Victor Moses is still celebrating his club’s 1-0 win over West Bromwich Albion side featuring Osaze Odemwingie. Moses who last week called on his mates to work very hard for the English FA Cup said that the slim margin victory would count a lot at the end of the season. The Nigerian attacker made his view known via Twitter.

He said, “Important win yesterday keeps us on the right track lookin forward to next game now.”