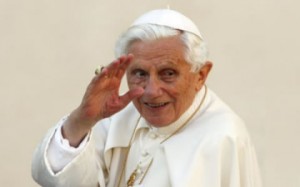 Since the surprise announcement that Pope Benedict XVI was retiring — set for 8 pm on Thursday — details have slowly emerged about what sort of life the former pontiff will live after his time as head of the Catholic Church is over.

It’s been 600 years since the last pope stepped down so it wasn’t clear what Benedict would do after his resignation. In the immediate aftermath of the announcement, on February 11, some even wondered what you call a retired pope.

On Tuesday, the Vatican clarified the issue by announcing that Benedict will keep his papal name, instead of reverting to Joseph Ratzinger, and will be referred to as “pope emeritus.” He will also keep the title of “His Holiness,” but not the other one: Bishop of Rome.

Vatican spokesman, Rev. Federico Lombardi, said that Benedict himself made the decision in consultation with others.

However, the retiring pope will also have to give up a number of his ecclesiastical goods, including many that are steeped in the history and symbolism of the church such as his papal ring and red shoes.

Here is a look at five items Benedict will be giving up when he enters retirement.

According to Robert Dennis, a teaching fellow at the department of history at Queen’s University in Kingston, Ont., one of the most important ceremonial items Benedict will have to part with is his papal ring, which is also called the fisherman’s ring.

The gold ring, which bears an image of St. Peter and the current pope’s name, is used as a papal seal and is always destroyed at the end of a papacy, usually when the office-holder dies. The BBC reported that Benedict’s ring will be smashed by a specially designed silver hammer.

The ring “is a sign of authority of a particular pope and so that’s why it’s so important that the ring itself is destroyed once a papacy ends, so that no one can assert that authority except within whom it has been invested,” Dennis told CBC News.

On Thursday, the Vatican also announced that Benedict has decided to continue wearing a “simple white cassock,” or ankle-length robe, a colour which is reserved for the pope. But he will be giving up the mozzetta, the short, elbow-length cape that covers the pope’s shoulders.

“There is a lot of history and tradition when it comes to papal clothing, papal attire,” Dennis said. White is meant to symbolise purity and holiness.

It also symbolises “that the person who assumes the office of the pope is not chosen merely by a group of men, a group of cardinals, that he is chosen in a providential way,” Dennis said.

Some Vatican officials had previously suggested that Benedict would wear the red of cardinals or the black garb of an ordinary priest after he retired, instead of the papal white.

The Vatican also announced on Thursday that Benedict will no longer wear the red shoes traditionally worn by popes, which is said to symbolise the blood of the martyrs.

Instead, he will wear a pair of hand-cobbled brown loafers presented to him during a 2012 visit to Mexico.

According to Vatican Radio, Benedict’s Twitter account @Pontifex will be inactive during the interim period between the papal resignation and the election of a successor during the papal conclave, a period known as sede vacante.

The account, along with its eight companion accounts in different languages, has almost three million followers although Benedict has only tweeted 38 times since its debut in December.

Vatican Radio quoted Paul Tighe, undersecretary of the pontifical council for social communications, who said the Twitter account was created for the exclusive use of the current pontiff.

“@Pontifex will be available for use by the next pope as he may wish,” Tighe said in a statement.

Church officials have said Benedict will fly by helicopter after his official resignation to the papal summer home at Castel Gandolfo, about 25 kilometres south of Rome.

However, the move is only temporary while renovations are completed to a monastery inside the Vatican where he will ultimately live.

According to a report from NPR, the building is only a few hundred metres from Palace of Sixtus, the official residence of the pope and where Benedict’s successor will live.

The 85-year-old Benedict has said he plans to spend his retirement “hidden from the world” in a life of prayer. His personal secretary, Archbishop Georg Gaenswein, is to continue to attend to Benedict in retirement. But Gaenswein is also to remain the personal secretary or head of the papal household to the new pontiff as well, the Vatican has said.

How will the new pope be chosen?

The surprise announcement from Pope Benedict XVI that he will resign on February 28 thrusts the Roman Catholic Church into unfamiliar territory as it chooses a new leader.

The decision by Benedict, 85, marks the first time in nearly six centuries that a pontiff has chosen to give up the post.

The Holy See press office has said that Benedict will not take part in the conclave of cardinals who will go to Rome to choose his successor sometime in March.

Here’s a look at some of the questions surrounding the next six weeks in the life of the Catholic Church in the light of Benedict leaving the post he’s held since 2005.

Does the fact that it’s a papal resignation, rather than a death, affect the process of selecting the next pope?

As with so many elements of this story, it’s not 100 per cent clear.

“The short answer is we don’t know, because a resignation hasn’t happened since the medieval times, so we don’t know how that dynamic will affect the selection going forward,” says Robert Dennis, a PhD candidate and teaching fellow in the history department at Queen’s University in Kingston, Ont.

Yiftach Fehige, an associate professor at St. Michael’s College at the University of Toronto, says the selection process will be the same.

The only difference, Fehige says in an email, is that the conditions for the vacancy of the Apostolic See are different. That means the current pope “freely resigns” and that the resignation must be “properly manifested, i.e. his fishermen’s ring must be melted, he moves out from the papal chamber, etc.”

How does the conclave work?

Popes have traditionally been chosen at the conclave, a secret meeting of the College of Cardinals inside the Sistine Chapel. All cardinals younger than 80 can take part, a number reportedly around 117 or 118 at the moment.

The conclave opens at the Vatican with a mass led by the dean of the College of Cardinals, says Dennis. The cardinals then go to the Sistine Chapel to begin their deliberations, which can last for days. (The conclave that chose Benedict was one of the quickest in history, lasting only two days.)

While the deliberations are secret, Dennis says the cardinals will start by discussing the attributes they deem necessary in the next pope.

“They’ll begin to talk a little bit about the direction, the vision, what’s needed in a pope at the time because contexts change and circumstances change and the needs of the church change.”

Eventually, they will begin voting, with each cardinal walking to the front of the chapel to cast his ballot.

“Each ballot is pierced, so it’s not counted more than one time and then slowly the names of the candidates begin to emerge,” says Dennis.

Balloting continues, with two ballots a day, until one candidate emerges with two-thirds of the vote – a requirement set by Benedict that took the procedure back to a traditional level.

The process had been changed by Pope John Paul II to allow only a slight majority of votes to determine the winner.

If the voting continues for three days, Fehige says, there could be a break of up to a day.

Fehige expects a new pope will be chosen within three days.

At the end of the procedure, white smoke emerges from a chimney in St. Peter’s Square, indicating a new pope has been chosen.

How is secrecy enforced and maintained?

During the selection process, cardinals can’t even call home unless it is a very important matter, says Fehige. They are disconnected from any form of media and “secrecy is also enforced by threat of excommunication,” he says.

Very few outsiders are permitted inside.

“Two doctors are allowed into the conclave, as well as priests who are able to hear confessions in various languages and housekeeping staff,” the BBC reported, and even they have to swear an oath of perpetual secrecy.

Who are the likely contenders to succeed Benedict?

As with any high-profile vacancy, speculation around who might be Benedict’s successor is rampant.

Fehige says it’s difficult to say who might be the next pope. “I would have never thought they (would) elect a German. They did.”

Too often, he suggests, likely contenders enter history as contenders and not as popes.

Dennis thinks a non-European is a strong possibility, with a number of Latin-American candidates in the mix.

“One name much closer to home is Cardinal Marc Ouelett, who was the cardinal archbishop of Quebec City before leaving within the last year or two for a position in the Vatican. He’s quite charismatic, very well read, very well liked, very well known, so he certainly has a chance at election.”

Fehige, however, sees “zero” chance a Canadian will succeed Benedict.

“Canada is not the Vatican’s favourite, and none of the Canadian cardinals have what it takes to be pope. They are good in following, but poor in leading.”