Home Metro News I Was Expecting Twins But To My Shock, I Was Delivered Of...
Facebook
Twitter
WhatsApp 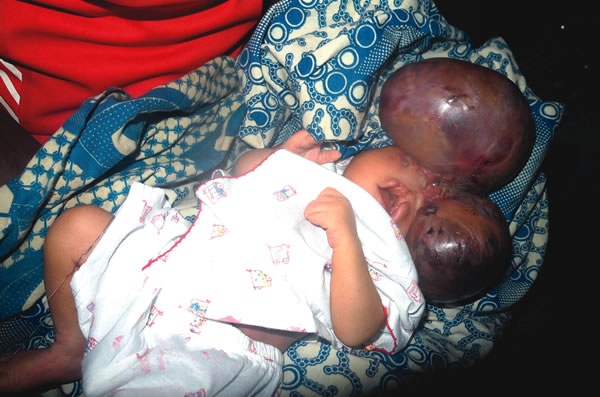 The joy of every expectant mother is to deliver safely; a healthy and normal baby but that was not the case for Malama Zainab, a 19-year-old mother who was delivered of a baby with ‘three heads.’

On that fateful Sunday, March 3, 2013, Zainab was rushed to the Malumfashi General Hospital in Katsina State and while in labour, members of her family eagerly anticipated the birth of twins as revealed by an earlier scan but to their shock and utter bewilderment, a baby girl with what appears to be an unusual head formation was delivered.

Instead of tears of joy, members of the family who were present at the hospital including Zainab’s husband, Malam Dahiru Umar busted into tears of sorrow when they were informed about the abnormalities of the new baby.

Zainab, on the other hand could not control her tears when she beheld the strange child. “I was shocked when I was told I gave birth to three-headed baby girl; I busted into tears because I was baffled and upset with the development.”

Recounting her ordeal, Zainab continued, “the delivery had confused me, because I have never expected it in my life. During my ante-natal visits to hospital, I was told that I was carrying twins, but to my utmost surprise, I gave birth to a three-headed baby.”

Zainab also explained that though that was her first delivery, she never experienced any abnormality during her ante-natal, adding that “I also underwent normal labour before I finally delivered the baby through normal processes.

“I have considered the development as a destiny and a test from the Almighty Allah, which every Muslim is expected to accept in good faith. As a Muslim, I have accepted it in good faith and prayed for Allah’s intervention. And I am sure Allah will not let us down as far as this issue is concerned, because He knows why this happened to us,” she concluded.