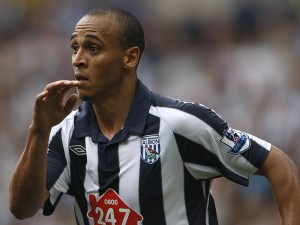 Nigerian international, Osaze Odemwingie will see out the remainder of his contract with English Premier League club West Brom. This is contrary to speculations the striker will leave at the end of the season after he tried to force a dealine transfer to QPR albeit, unsuccessfully.

Osaze has 15 months left on his current contract but West Brom manager – Steve Clarke – revealed the former Locomotiv Moscow forward will stay at the hawthorns beyond this season.

It would be recalled that Osaze was caught in a transfer web which led to him making some uncomplimentary remarks about the Baggies fans; which landed him a fine of two weeks wages. Although he later ate the humble pie by apologizing.