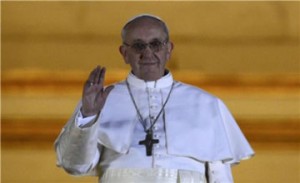 Newly elected Pope Francis has made a case for the poor, calling for a church that was both poor and for the poor.

In his first meeting with journalists on Saturday, the Pope, who was known as Cardinal Jorge Bergoglio of Buenos Aires, reportedly gave an insight into his choice of the name Francis, after St. Francis of Assisi, a symbol of peace, austerity and poverty.

He called Francis “the man who gives us this spirit of peace, the poor man”, and added, “Oh, how I would like a poor church, and for the poor.”

He recalled that as it became obvious that the votes were in his favour, a fellow cardinal, Claudio Hummes of Brazil, hugged and kissed him and told him “don’t forget the poor.”

He added that the words stuck to his mind.

“Right away, with regard to the poor, I thought of St. Francis of Assisi, then I thought of war. Francis loved peace and that is how the name came to me,” he said.

He also said he thought of St. Francis of Assisi’s concern for the natural environment and how he was a “poor man, a simple man, as we would like a poor church, for the poor.”

During the meeting, the Pope reportedly began by thanking all the journalists for their efforts to share with the world the momentous events for the church in the days since Benedict announced his unexpected resignation.

He drew a parallel between the work of the media and that of the church, saying both worked to communicate “truth, beauty and goodness.”

The new Pope concluded with a blessing for all the journalists present and their families.

“I told you I would willingly give you a blessing. Since many of you do not belong to the Catholic Church and others are non-believers, from the bottom of my heart I give this silent blessing to each and every one of you, respecting the conscience of each one of you but knowing that each one of you is a child of God. May God bless all of you,” he said.

St. Francis of Assisi, who died in 1226, renounced his family’s fortune for a life of charity and poverty and is also revered by environmentalists because he loved nature and preached to animals.