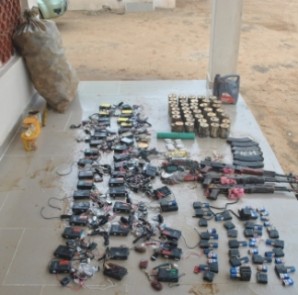 Assault rifles, ammunition and bomb making items were among items recovered by men of the Nigerian Army on Tuesday evening when they raided the house of a Kaduna politician, Honorable Hussaini Dei Dei located along Sabon Birni Road, Kawo New Extension in Kaduna metropolis.

Addressing a press conference, the Commander, 1 Division Internal Security Force, Brigadier General Tagbo Ude said following intelligence report, a raid was carried out at about 5.30pm  at a residence just behind the Dalet Barracks  which houses the headquarters of 1 Division.

According to him, “Six AK 47 assault rifles and some ammunition and bomb making devices were found following raid by Nigerian troops on the home of a serving politician, Hussain Dei Dei near Dalet barrack in Kawo area of Kaduna city.” The statement also added that two men, two women and five children were arrested during the operation.

The statement urged members of the public to be vigilant and report any suspicious activities to the authorities.