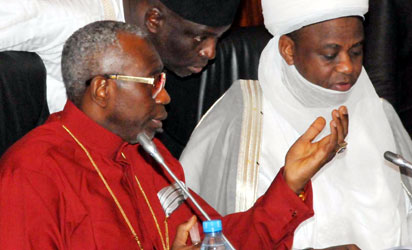 The Muslim Rights Concern (MURIC) has lampooned the leadership of the Christian Association of Nigeria (CAN), for attacking the Sultan of Sokoto and the President-General of the Supreme Council for Islamic Affairs (NSCIA), Alhaji Muhammed Abubakar Sa’ad, over his recent call for amnesty for Boko Haram.

Prof. Ishaq Akintola, MURIC’s director, in a statement yesterday in Ibadan, said instead of throwing stones at the Sultan, the leadership of CAN should join him and the federal government to find a lasting solution to the ongoing destruction of life and property in Northern Nigeria by the radical Islamic sect.

The group which charged religious leaders to watch their utterances and control their emotions said that it amounts to double standard “if we are willing to grant amnesty in one case but determined to ‘crush’ with military might in another.

“Perhaps CAN is secretly eyeing American drones stationed in Niger Republic. We should not forget that when a hen perches on a rope, neither the rope nor the hen can be stable,” MURIC said.

While backing the Sultan’s call for amnesty for Boko Haram, it affirmed that this will not be the first time Nigeria was granting amnesty to dissident groups.

According to MURIC, Federal Government declared amnesty for the Niger Delta militants when a Muslim was in government and the nation benefitted from it.

MURIC further hailed the current Sultan describing him as the best thing that had happened to the Nigerian Muslim Ummah in decades saying,“We repose full confidence in his person and admire his style of leadership.

“Mobile and articulate, Sultan Abubakar III is a great inspiration for us. He is a leader with great integrity, a patriot primus inter peres and a statesman nulli secundus. We will therefore not stand akimbo while some people treat him with disrespect. We remind CAN that respect begets respect,” it said.