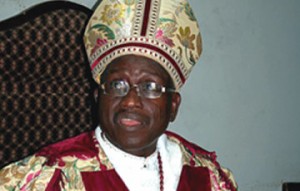 The Primate of the Methodist Church, Nigeria, His Eminence, Bishop Ola Makinde, has described as disappointing, the call by the Sultan of Sokoto, Alhaji Saad Abubakar III for amnesty for Boko Haram members.

Speaking on Friday during the Holy Communion Service of the 51st annual synod of the church at Methodist Church, Ekotedo, Ibadan, Makinde expressed his disappointment saying there is no way faceless people could be granted amnesty.

The Sultan had last week proposed what he believed could be thee lasting solution to the insurgency, and has demanded “total amnesty” for members of the sect in order to promote peace in the country.

However, Makinde said, “I am disappointed in the statement credited to the Sultan of Sokoto that terrorists should be granted amnesty.

“How can you grant amnesty to a faceless group or a set of criminals? Traditional and spiritual leaders should be custodians of morality in the land.”

Makinde opined that it would be wrong to equate the Boko Haram insurrection to what happened in the Niger Delta.

According to him, the people of Niger Delta fought against environmental degradation and resource control.

“What is Boko Haram for? Are they fighting for groundnut or cow resource control?” Makinde asked rhetorically.

“We must be very careful that we don’t have religious war in this country. You can imagine it is being revealed that 83 per cent of the oil blocs are owned by the northerners. They want political and economic powers combined.”

“What is killing this country is corruption. In 1993, I said unless the nation tackles the issue of corruption it would kill everything that is noble in our country. That is what we are seeing in the politics of our nation today.”