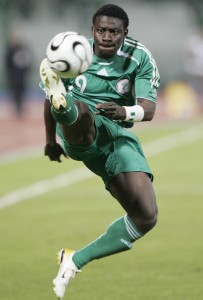 New Seattle Sounders striker Obafemi Martins joined the rest of the Super Eagles team in Calabar yesterday and vowed to sink the Harambee Stars of Kenya in the Eagles World Cup qualifying match this weekend.

Martins who earned a recall into the Super Eagles fold after years of absence was part of the Eagles team that won the Harambee Stars 3-2 in Nairobi in a 2010 World Cup qualifier, a match where he played a vital role.

The lethal finisher scored a brace to help Eagles win 3-2. Yakubu Aigbeni scored the other goal.

The former Levante man and Chelsea star Victor Moses arrived late and were not part of Tuesday evening’s training, but they will be joining the rest of the team for Wednesday training at the Abraham Ordia Sports complex, University of Calabar.

All the 14 foreign based players arrived at the Transcorp Metropolitan Hotel Camp of the Super Eagles on Tuesday afternoon, despite local aviation workers’ dispute.

Chelsea star Victor Moses had to take a detour through the Uyo Airport to be on time for Tuesday’s training; his and other players’ commitment impressing the coaches.