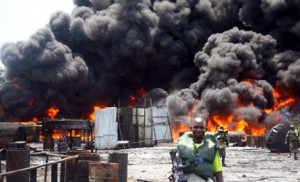 Announcing the discovery, the Commandant of the Nigerian Security and Civil Defence Corps, NSCDC, in the state, Mr. Michael Ochogwu told NAN that naval officers from their Onitsha outpost discovered the illegal activities and invited the NSCDC to inspect and evacuate the tanks and products.

According to him, a combined team of the NSCDC, the Nigeria Army and the Nigerian Navy visited the area and discovered 23 illegal refineries near Iyiowa Odekpe, Atani in Ogbaru.

“The areas where the illegal refineries were discovered spanned more than two kilometres. Fire wood used for the refining, refined and unrefined products were discovered. We travelled for almost one and a half hours before reaching the site of the refineries,” he said.

Ochogwu said however that the vandals operating the facilities were not arrested “because they took to their heels on sighting the army and naval officers who discovered their nefarious activities.”

He expressed surprise that some Nigerians had created illegal refineries on river banks for years, to refine crude oil illegally transported from the sea.

Ochogwu who commended the efforts of the naval and army officers, emphasized the need for adequate training and provision of speed boats for the NSCDC to adequately tackle vandalism.

Ochogwu called on traditional rulers and members of the public to provide information that could lead to the arrest of suspects as he noted that vandalism is increasing in the state at an alarming rate.

He therefore called on the management of the NNPC to evacuate the 453 drums of illegally refined diesel at its headquarters in Awka.