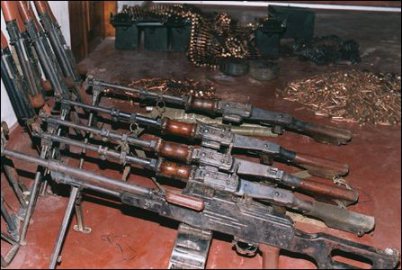 Two AK 47 rifles and 320 live ammunitions have been discovered in Bauchi state by the  Inspector General of Police Anti Robbery Squad attached to armed robbers hunter, Alhaji Ali Kwara, in collaboration with the state Police Command.

Ali Kwara who said the team pursued the armed robbers who came from Owerri in Imo State told newsmen that arms and ammunitions were intercepted between Azare and Potiskum in Yobe state when the robbers abandoned their vehicles and fled into the nearby bush following a hot pursuit.

“We recovered two AK 47 riffles and over 320 rounds of ammunitions and their Hilux vehicle with chassis number 22g403049570 and registration number 526144734. We have handed over the vehicle and the recovered arms to the Bauchi State police commissioner” he said.