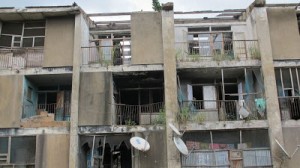 About 721 policemen and their families, residing in the barracks at the Central Police Station, CPS, and Police Area Command, Onitsha, have been rendered homeless by the Anambra State Police Command who ordered the demolition of their buildings and shops.

The affected policemen shot back, accusing the state Police Command of being insensitive.

Confusion was obvious in the demeanour of the victims who were seen discussing in groups as others removed their belongings to safety.

An inspector of police who spoke with newsmen in Onitsha said he had been living in the barracks for the past 21 years, adding that he had consistently been paying rent to the police authorities and described the statement credited to the CP as untrue.

“It was yesterday morning (Wednesday) that we saw to our greatest surprise, a quit notice pasted on our doors signed by the Officer in Charge of Provost, ordering us to vacate our houses and that our wives should vacate their shops within 48 hours, without prior notice to that effect.

“Before now, we had no problem with anybody as we have been paying our rents to the relevant police authority and even some of us have just signed what we call accommodation money last January and our money is being deducted from our salaries.  To just wake up and kick us out of our homes is an act of wickedness.”

Mrs. Maria Iguh who spoke on behalf of Police Officers Wives Association, POWA, lamented that the on going demolition of their shops was being done in bad faith and called on President Goodluck Jonathan to come to their aid.

Iguh explained that they bought the shops from POWA, and that they have remained and kept their own part of the bargain to pay tenancy to the police authority. She therefore expressed surprise at the shortness of time given to them to vacate their shops.

“We bought these shops from POWA and since then we have been paying to the police for what they called security fee and we obeyed and painted our shops in police colour. Then this morning, we saw quit notice ordering us to vacate within 48 hours. We are in trouble because some of us have lost shelter and their shops and our children will soon resume school and we don’t have any other place to go,” she said.