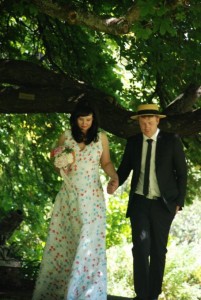 Australian fashion designer Stephanie Wilson married her high-school sweetheart in a unique dress made from 100,000 plastic bread tags she had collected over the last 10 years.

Stephanie Wilson and Will Wapling met and became friends while attending Belmont High School in Geelong. After completing Year 12, the two became a couple and moved in together. Stephanie remembers there was a pile of bread tags on the window sill of their home which they kept adding to. She and Will used to joke that when there were enough tags to make a wedding dress they would get married. It may have been a joke to them, but as soon as people found out about their plan they started collecting bread tags and giving them to the lovebirds.

At one point, they were getting so many that Stephanie had to get bigger jars to store them in. Then, 10 years later, they realized their idea wasn’t so crazy after all, and decided to go through with it. Having dozens of jars full of plastic tags sitting in their home, Stephanie and Will were sure they had enough bread tags to make the dress. It turned out they were wrong, but luckily the groom-to-be had a baker cousin who came to the rescue with rolls of fresh tags.

Making the dress was easier than Stephanie anticipated, as the sewing machine had no trouble piercing through the tags and stitching them to the cotton base, but actually designing the gown took her hundreds of hours. ”The main thing in the designing of the dress was that I didn’t want people to be able to tell the tags were stitched on. I wanted them all overlapping, so you couldn’t see the stitching,” Ms Watson told the Geelong Advertiser. But in the end the dress came out just perfect. Made from 100,000 bread tags stamped with “best-by dates”, the dress was a record of the many years Stephanie and Will had been together, which made it even more special. It weighed just seven kilograms and best of all, and despite costing just $36, it had priceless sentimental value.

“I just didn’t want to have a normal bridal gown,” the 29-year-old fashion designer said. ”There are so many occasions where you can wear a beautiful feminine dress in your life. For a really special day I thought, why not have something completely outlandish?”