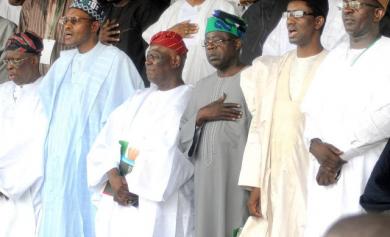 A former Governor of Lagos State, Chief Bola Tinubu, said on Thursday that he had no regrets pushing for Mr Babatunde Fashola as his successor in 2007.

“When I was pushing for him to become governor in 2007, they said that he could not do anything.

“Today, I am vindicated. Thank you for not disappointing me and Lagosians and for not putting me to shame,” he told thousands of Action Congress of Nigeria (ACN) supporters in Lagos at the party’s convention.

The convention, which held at the Onikan Stadium on Lagos Island, had in attendance 4, 691 delegates from the 36 states and Abuja.

Tinubu said: “You (Fashola) have actualised our vision and dreams. We are proud of your performance.”

He also commended some political leaders, including retired Gen. Muhammadu Buhari, the Presidential Candidate of the Congress for Progressive Change (CPC) in the 2011 elections, for their efforts in deepening the country’s democracy.

Tinubu also named former governors of Kano State and Ogun, Ibrahim Sekarau and Chief Olusegun Osoba, respectively,  as among those helping to deepen the nation’s democracy.