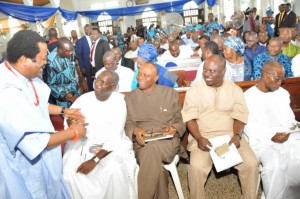 Funeral services are usually solemn and time for a sober reflection, but for the protocol officials of the Federal Government and the Ogun State Government who almost disrupted the funeral service held for late Chairman of Tribune titles, Chief Oluwole Awolowo on Friday, it was a time for power tussle.

Confusion started few minutes before the commencement of the programme which was held at Our Saviour’s Anglican Church Ikenne, when one of the Protocol officials of the State government asked some members of the delegation of the Federal Government to vacate the front seats for the State governor Ibikunle Amosun and other governors.

The clash of interest between the two governments’ officials was hinged on who should sit on the first seats in the Church that had already been reserved for dignitaries.

The Protocol officials of the FG became infuriated over the action of their counterparts in the State government who insisted that only one person from the delegation of the Presidency would be allowed to sit at the front seat.

Reports say it was only the intervention of a grand child in the Awolowo family, Segun, who begged them not to disrupt his uncle’s funeral service that stopped the issue from getting out of hand.

When the Minister of Information Mr Labaran Maku, who was representing the president arrived the Church after the first crisis had been resolved, Ambassador Olugbenga Ashiru had to vacate his seat for him.

Little did anyone know that the crisis was far from over as it reared its ugly head when another set of seats were arranged at the front for the five Governors that were at the service.

This development appalled the delegation of the President who resisted it but were ignored.

The crisis climaxed when the moderator called the representative of the President to speak before the governor of the State contrary to the order of protocol.

The Labaran Maku-led delegation ignored the call and did not stand up to deliver the President’s speech. The gesture put the programme on hold for a while before one of the Awolowo daughters, Tokunbo Awolowo-Dosunmu quickly went to the moderator to correct him.

Governor Ibikunle Amosun in his remarks publicly acknowledged the flop in the protocol, saying the Presidency would make the final speech as the protocol demands. The President’s representative, Labaran Maku later spoke last.