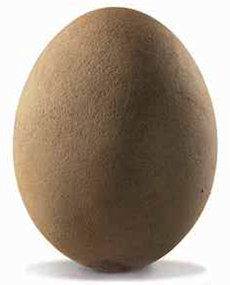 A fossilized egg belonging to the largest known species of bird in history sold at an auction this week for $101,813.

The elephant bird (Aepyornis maximus) egg was sold as part of Christie’s “Travel, Science and Natural History” collection. The elephant bird went extinct sometime in the 17th or 18th century. It grew to 10 feet tall and could weigh up to 1,000 pounds.

“The elephant bird was thought to be the giant flying beast known as the Roc (or Rukh) in the tales of Sinbad and accounts of Marco Polo’s voyages,” says a description on Christie’s website. “The bird grew to around 10 or 11 feet in height and whilst probably unable to devour an elephant, as the Roc was reputed to do, it certainly was the largest bird ever to have lived.”

Though the exact reason for the bird’s demise is not known, it’s assumed that human activity played a major role. More specifically, the BBC says this could be due to the fact that an elephant bird egg was large enough to feed an entire family of humans.

Interestingly, the egg was only valued at between $30,500 and $45,700 by Christie’s but a flurry of bids on the last day of the auction pushed it up to more than double that.

The elephant bird egg was eventually sold to an anonymous bidder. It is believed that the egg dates back to the 17th century, placing it at a time close to the extinction of the species.