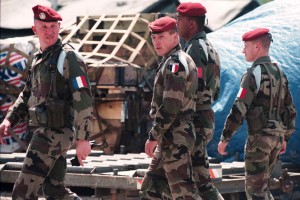 France is cutting jobs as financial crisis hit Europe’s second largest economy and no sector seems to be a sacred cow in this matter, not even the military.

Nearly 10 percent of all jobs in the armed forces will be cut, according to a government review commission.

The white paper, published on Monday, recommends that 24,000 military posts be axed by 2019 on top of the 54,000 job cuts already announced by former president Nicolas Sarkozy in 2008.

The paper, officially submitted to President Francois Hollande, also calls for a reduction in the number of soldiers able to be rapidly deployed abroad, from the current 30,000 to between 15,000 and 20,000.

The figures do not include the 10,000 military jobs due to go soon.

“If there is one common theme in what we wanted to implement with the white paper, it is to ensure the best training, the best equipment and the best possible intelligence for our armed forces. They deserve it,” Hollande said.

The paper sets the general direction of France’s defence policy and highlights the need to protect France from high-level threats and budgetary constraints as the country teeters on the verge of recession.

While reducing the country’s deployable forces, the review calls for better cyber-defence and intelligence, with a particular focus on drones of its own.

France’s deficit of surveillance drones was highlighted during its recent intervention against Islamist rebels in Mali, where the United States deployed several Predator drones in support of French forces.

The military will still have a budget of $234.9bn between 2014 and 2019, the second-largest defence budget in the EU after Britain.

Jean-Marie Guehenno, who presided over the commission that drew up the white paper, said France’s allies did not expect it to be able to “do everything everywhere”.

Uprisings in North Africa and the Middle East, France’s war in Mali and the civil war in Syria are among the events shaping France’s defence outlook that were not predicted in the country’s strategy five years ago.

The review drew criticism from several politicians and experts.

“This is real madness. We have already reduced the army’s size a lot over the past five years,” he said.