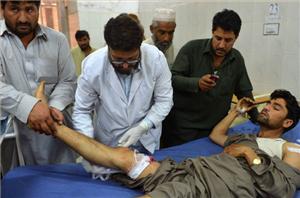 No fewer than eight people have been killed and 45 others wounded after a suicide bomber rammed his motorcycle into a bus in Peshawar, Pakistani police have said.

One of those killed include the son of an influential Afghan cleric, Qazi Amin Waqad. Qari Hilal died in Monday’s suicide bombing that appeared to have targeted Sahibzada Anees, a senior official in the city administration who had passed by shortly before the blast in the Jehangir Abad neighbourhood.

Qazi Amin Waqad is a member of Afghanistan’s High Peace Council, which is trying to draw the Afghan Taliban into peace talks.

The attack is the latest in a wave of violence that has rocked Pakistan ahead of national elections on May 11.

“At least eight people were killed and 45 others were wounded in the suicide bombing,” Mohammad Faisal, a police official, told the AFP news agency.

“The commissioner, who passed just a minute before from the road, was the target of the bombing, but he escaped unhurt as the bomber missed the target and struck his motorcycle into a passenger bus.”

He added that shattered body parts of the suicide bomber were found at the blast site.

At least 56 people have been killed in attacks targeting politicians and political parties since April 11, according to a tally by the AFP news agency.

No one immediately claimed responsibility for Monday’s attack, but the Pakistani Taliban who had always expressed its opposition to secular parties taking part in the forthcoming elections, had previously claimed several attacks over the weekend.

The group has been waging a bloody campaign against the government for years and has stepped up attacks ahead of the vote.

On Sunday, 11 people were killed in bomb attacks on a political rally and two campaign offices in the northwest.