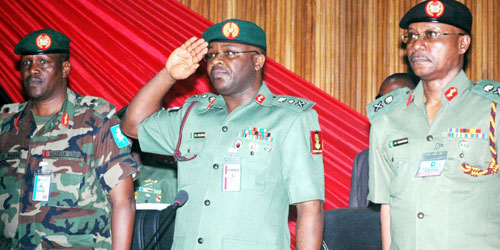 Chief of Army Staff, COAS, Lieutenant General Azubuike Ihejirika, yesterday, in Lagos, said the security threats bedevilling the country were not conventional and told Army personnel to be at alert with a view to checkmating the new trend.

He noted the complex dimension suicide bombing had introduced as extremists attempt to foist their ideology on the country.

The COAS who spoke while declaring open the 2013 First Commanding Officers’ Workshop at the 81 Division of the Nigerian Army, Victoria Island, Lagos, said those behind the challenges “employ all forms of unconventional weapons and tactics in urban and rural areas capitalizing on the porosity of our borders.

“It’s capability in some cases has no doubt overwhelmed the capacity of our border security agencies including the police.

“From the creeks in the Niger Delta to the Sahel Savannah region in the North East and North West, there is no clear line between you and the adversary. “

The workshop with the theme “Enhancing the Capacity of Commanding Officers to Meet with Contemporary Challenges” he explained, was aimed at building officers’ capability in terms of physical, doctrinal and conceptual components.

Calling on officers and men of the Nigerian Army to be prepared against both internal and external aggression, Ihejirika said, “I expect you as part of operational security to ensure maximum troops’ alertness and security of your personnel, installation and equipment at all times”, reiterating that their deployment to deal with distress situations must be robust while stressing that maximum consideration for the issue of collateral damage must be observed.