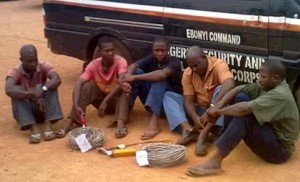 Confirming the arrest, Commandant of NSCDC in Ebonyi state, Ego Echendu said that the arrest of Onyekachi in Okofia village of Ezza East Development Centre made it a total of 11 suspects the Command had so far arrested this year at various LGAs across the state.

She lamented that the illegal activities of vandals were intended to frustrate the effort of federal, state and local government administration towards the provision of power supply and other basic amenities for the benefit of the general populace. She therefore warned youths who engage in such practices to desist from it as anybody caught would face the full wrath of the law.

Onyekachi, 28, who confessed to have engaged in similar venture in Anambra State before coming to his village, revealed that his operation at Ezza East Development Centre made it the 17th time he had engaged in the vandalism of PHCN cables in the country.

Addressing newsmen at the Command Headquarters in Abakaliki, the Corps Public Relations Officer, Assistant Superintendent of Corps, ASC Emmanuel Nwali, noted that the suspect sustained various degrees of burns on his belly, hands and face resulting from the electrical shock he received while attempting to steal a size 18 bolt from the high tension transmission cable behind Ezza East Development Centre of the state.

“At about 7: 30 last night, we got a signal from one of our divisions, precisely in Ezza East Development Centre of Ezza South LGA that a young man was caught vandalizing PHCN transmission cable.

“It was as a result of him trying to remove a size 18 bolt from the transmission cable that made him sustain all those burns; our men tried to save his life by calling PHCN which eventually switched off power supply from the station. From the victim’s confessional statement, we gathered that he has been in the business for a long time, making this last mission his 17th time.

“The law has caught up with him and he will face all the charges against him in court. This is one of our core mandate; 24 hours we are alert to make sure that government’s infrastructure are well secured, including PHCN installations,” she said

The Coordinator, Ezza East Development Centre, Fidelis Uwa, who was at the NSCDC Command in the state at the time the suspect was arrested, lamented that the activities of the vandals at his Development Centre which he said had suffered so much from their activities.

“If I repair the transformer at the Development Centre today, for example, and they see that there is light today, the next day they will come and vandalize it.

“Around 7:30 in the night I learnt that somebody came to vandalize our electrical outfit and was electrocuted and was hanging head faced down. He was later rescued and brought to Civil Defence Headquarters in the state, while those that came with him for the operation escaped,” Uwa said.

“Our youths should be well tutored to work and earn legitimate money; however the greatest challenge facing the youth is the wrong and dirty films they watch from Nigeria’s so-called home videos. Once they get into the school, their first point of call is for them to join a cult. This is not good for our society and the future of this country,” he stressed.