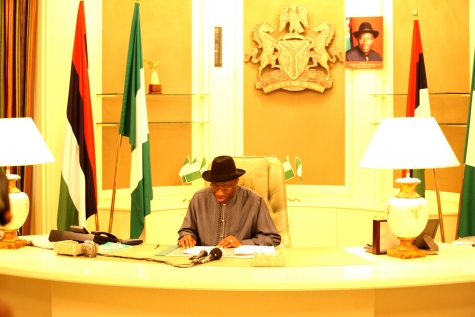 The statement reads: “Nigerians, once again, are being entertained by the Abuja theater circus. Figures and numbers that translate to nothing for the ordinary Nigerian are being bandied as achievements. Their penchant for dancing naked in the market place is now commonplace.

“The small-minded media minstrels of Abuja are at it again. It is a curious thing. They call former Lagos Governor Bola Ahmed Tinubu and Gen. Muhammadu Buhari insignificant and are nothing to fear, yet they seem to spend so much of their time on them. Does the eagle fear the sparrow or does an elephant fear a blade of grass? Despite their huffing and puffing, they know they are not the eagle or the elephant. Deep in their hearts, they fear that the APC has the potential for change that they lack.

“Governor Tinubu and Gen. Buhari are flattered by the attention. But Nigerians must heed the warning signs about this government and its anti-people policies. If they would only do their work as they should, the opposition and indeed millions of Nigerians would have very little to say but to congratulate them. Instead they chase after the opposition leaders like street kids running after a moving car. We have left them behind. They will soon be past history.

“They can’t let their record speak for itself because it will only say bad things about them. Nigerians today are saddled with a government that lacks the presence of mind and the discipline to serve the people. The cluelessness of the current government needs no announcement. Their incompetencies need no contestation. It is large in the policy somersaults, mis-speak and economic and security malaise now prevalent.

“Nigerians are currently saddled with a government asleep at the switch. This is a government engaged only in dynamic inactivity. Of motions and gyrations without moving Nigeria forward. Nigerians are eyewitnesses to history and will be the judge when the time comes. They are possessed by the greatest political fear of them all – not that people will mistake who they are but that the people truly know who they are.

“Thus, in a futile attempt, they seek to belittle the accomplishments of Governor Tinubu as governor of Lagos, they shoot themselves in the foot. There is concrete and verifiable evidence about the transformation of Lagos, a foundation laid by Governor Tinubu and his team. The Tinubu-Fashola plan for the transformation of Lagos has worked. And as members of the same party they had a coherent plan to develop Lagos State.

“Can they say the same thing about anything at the federal level? Everything they touch gets broken. They call what they are doing a transformation agenda. They seem to want to transform the nation into one big failure. Nigerians have endured this with grace and good humor. It is time for serious people with serious plans to address the serious problems we face.

“The Federal Government presides over failure after failure, yet they spend time criticizing the success that is Lagos. Tinubu and Fashola can walk anywhere in Lagos in peace and without an army to protect them. I wonder if they can make that claim about their leaders and the whole of Nigeria. No one needs a President on lock down in Aso Villa all the time, completely isolated from the people he governs.

“A leader who locks down every city he visits in Nigeria for security reasons is not our idea of a successful citizen friendly leader. There is no greater liability than such a presidency.”