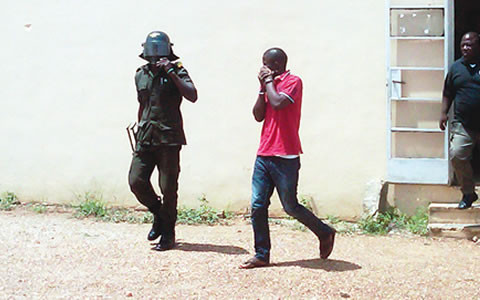 A 31-year old man, Kelvin Igha-Ighodalo was yesterday sentenced to 45-years imprisonment without an option of fine by an Osogbo High Court for stealing a Sony Ericson phone belonging to Osun State Governor – Ogbeni Rauf Aregbesola.

The convict was accused of stealing the phone during the swearing-in ceremony of the governor in 2010.

He was also said to have used the phone for fraudulent purposes by duping many unsuspecting people.

It was gathered that Igha-Ighodalo was eventually arrested and charged with six counts of conspiracy, obtaining property by false, stealing, impersonation and advance free fraud; charges to which he pleaded guilty and Justice Oyejide Falola sentenced him to 45 years imprisonment to run concurrently without an option of fine.

It was learnt that the convict had earlier served six years imprisonment at Ikoyi prisons in Lagos over a murder charge levelled against him.

According to the charge sheet, “Kelvin and others now at large on May 24th, 2011, impersonated the governor by using his phone with intent to defraud and obtained N500,000 from his royal majesty, Oba Gabriel Adekunle Aromolaran, Owa-Obokun of Ijesha land”.

The prosecution led by Mr. Biodun Badiora, told the court that the convict committed an offence contrary to section 8(c) and punishable under section 1(3) of the Advance Free Fraud and other related offences Act, 2006.