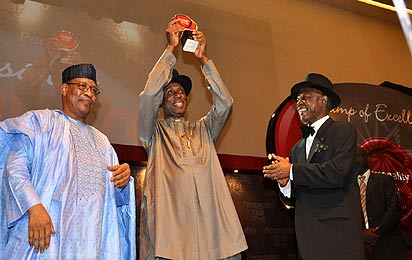 Governor Rotimi Amaechi of Rivers State yesterday in a veiled attack at the country’s leadership, stated that Nigeria is gradually sliding back to the era of dictatorship even as he praised the country’s media for remaining “the ray of hope in a dark era.”

In the preliminary comments he made before reading his speech at the grand event at the Expo Centre of Eko Hotel in Lagos, where he received the Vanguard Personality of the Year Award, the Chairman of the Nigeria Governors’ Forum, who has of late been involved in an altercation with President Goodluck Jonathan’s men, explained that unlike his usual style of speaking extemporally, he decided to read a prepared speech, because “I am becoming more careful, given that we are gradually going back to the era of dictatorship in this country.”

According to Amaechi’s achievements in the last one year recited at the event which stated that “he is being honoured for his widely acknowledged developmental strides which have seen noteworthy improvements in infrastructure and the impartation of governance on all sectors of the society in Rivers State,” the governor, who dedicated the award to the people of Rivers State responded, “I am just an errand boy. Our understanding of political power is that power belongs to the voters.”