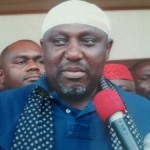 Governor Rochas Okorocha of Imo State who was involved in an auto crash on Friday at Orlu, has undergone MRI test in a London hospital following injuries to the head.

Commissioner for Information Culture and Tourism, Mr Chinedu Offor who made this known to journalists, said that the governor was flown to London Friday for treatment of the injuries he had in the accident.

He said the MRI test is to determine the degree of impact the accident had on Okorocha’s head adding that it was a precautionary measure aimed at making sure that the governor is fine before he resumes work.

He was however optimistic that the governor will return soon.

Okorocha was airlifted to London via the Port Harcourt International airport.