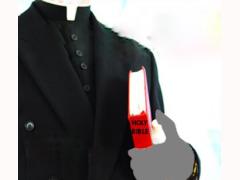 The police in Lagos on Monday arraigned a 25-year-old pastor, Tommy Issachar, over an alleged stealing of a female church  member’s underwear and N10,000 cash.

Issachar, who resides at No 35, Mafoluku St., Mafoluku, Oshodi, Lagos, appeared before an Oshodi Magistrates’ Court in Lagos, on a two-count charge of breach of public peace and stealing.

The prosecutor, Cpl. Kehinde Olatunde told the court that the accused committed the offences on April 12 at Mafoluku, Oshodi.

He said that the accused stole two pants, one bra and a cash sum of N10,000 belonging to Mrs Gift Bassey when she accommodated him for three days in a special prayer session related to her husband’s business.

According to the prosecutor, “At first, the accused denied taking those underwears but later confessed that he actually took them. He said that he wanted to use them to pray for her, but denied taking the money.”

Olatunde said that after the underwear was recovered from the accused, he had been sending series of threat text messages to the complainant.

“The accused always send her text messages, threatening to eliminate her on or before August ending,” he said.

Olatunde said that the offences committed contravened Sections 166 and 285 of the Criminal Laws of Lagos State, 2011. The Section provides that if convicted of stealing, the accused is liable to three years imprisonment.

The magistrate, Mr Akeem Fashola, granted the accused bail in the sum of N50,000, with one surety in like sum, and adjourned the case till May 8 for mention.(NAN)