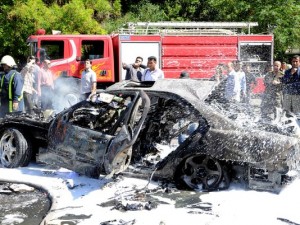 “The terrorist explosion in al-Mazzeh was an attempt to target the convoy of the prime minister. Doctor Wael al-Halqi is well and not hurt at all,” state television said on Monday, also showing footage of heavily damaged cars and debris in the area of the blast as firefighters fought to extinguish a large blaze caused by the explosion.

According to a Syrian government official who spoke to The Associated Press on condition of anonymity because he was not authorised to speak to the media, an improvised explosive device was placed under a car that was parked in the area and was detonated as al-Halqi’s car drove by.

A UK-based group of activists with a network of sources in Syria, the Syrian Observatory for Human Rights, said one of al-Halqi’s bodyguards had been killed.

“A second bodyguard and the driver are in critical condition,” Observatory director Rami Abdel Rahman said.

The government-run Al-Ikhbariya station said al-Halqi went into a meeting with an economic committee straight after the bombing.

A news bulletin quoted al-Halqi as saying “these types of attacks are nothing but proof of the discouragement and despair of the terrorist groups as a result of the actions of the Syrian army”.

The attack was not the first targeting a high official in the Syrian capital over the past year.

On July 18, a blast at the Syrian national security building in Damascus during a meeting of Cabinet ministers killed the defence minister and his deputy, who was President Bashar al-Assad’s brother-in-law.