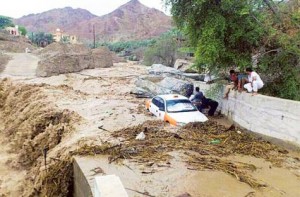 Flooded gully in the Eastern Region of Muscat, the Omani capital, has swept away two teenagers, the Royal Oman Police reported late on Tuesday.

The deaths came as much of the northern half of the country braced for two days of unsettled weather attributed to a low pressure system building over the Sultanate.

The two boys, aged 16 and 14, were crossing a gully in the Ibri district of Dhahirah governorate when they were surprised by a raging flood, authorities said. Elsewhere around the country, Civil Defence personnel were at full stretch assisting helicopter crews and ground teams in the rescue of scores of people stranded in flooded wadis during the course of Tuesday.

The Directorate General of Meteorology and Air Navigation (DGMAN), which provides regular forecasts of the weather situation in Oman, said a number of wadis were in full flow in the governorates of Dhahirah, Buraimi, Dakhiliya, and Batinah North, as well as the capital region of Muscat.

Dozens of schools in the capital were on Wednesday morning forced to close as thunderstorms struck. Radio channels began broadcasting news of closures at dawn, sparing thousands of pupils the inconvenience of getting to school through gridlocked traffic junctions and waterlogged streets. Government-run schools too remained largely shut in anticipation of more adverse weather later in the day.

Gusting winds felled a number of trees along usually busy carriageways in Muscat, triggering lengthy tailbacks extending several kilometres in some places. Flooded street corners and other rain-related impediments also made driving a tortuous exercise for many motorists.

Meanwhile, the Met Office has forecast more thunderstorms, accompanied by rain and strong winds, over the course of Wednesday and Thursday. Hailstorms, which have lashed some areas of the country, will continue to be a feature of the current weather situation, an official said. Fishermen too have been warned not to venture out to sea in anticipation of rough conditions.