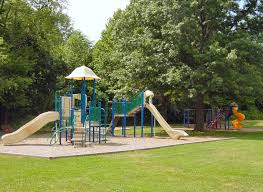 The British and the Americans are quarreling – albeit tongue-in-cheek – over territory again.This time, though, it’s over who has the world’s smallest park.

One, in Portland, Ore., is essentially a concrete planter, 2-feet in diameter, with soil and some vegetation, and the Guinness Book of World Records says it’s the smallest.

The other is about 5,000 miles away, in England. Those guys don’t claim to have a physically smaller park – theirs is 15 feet by 30 feet. But they are disputing whether Portland’s is a park at all.

What started as two Brits’ stunt to drum up publicity for a charity run at their park sparked some cross-pond banter. One online commenter wrote: “If that’s a park then my window box should take the title.”

Someone who said they were from Portland replied: “Yes, but our park has leprechauns. Does yours?”

Leprechauns? Yes, that’s right. The faux-feud has helped unearth the curious story of a Portland newspaper columnist’s quest to get the park declared the smallest and his claim that it was home to leprechauns.

The tale stretches back to 1946, when newspaperman Dick Fagan returned from World War II. From his office at the Oregon Journal newspaper, he could see a hole in the street where a light post was supposed to be erected. Fagan got tired of looking at the hole and planted flowers in it.

An Irishman with a vivid imagination, Fagan wrote about the park in his columns – spinning tales about leprechauns who lived there. Somehow, Guinness proclaimed Mill Ends Park the world’s smallest park in 1971.

Jamie Panas, the record-keepers’ spokeswoman, said she didn’t know how that determination was made. But she said the entry in the Guinness database reads, in part: “It was designated as a city park on 17 March 1948 at the behest of the city journalist Dick Fagan (USA) for snail races and as a colony for leprechauns. ”

Over the years, Portland has been kind to the tiny park, giving it equal care as that afforded to the 200 or so normal-size parks scattered around the verdant city.

St. Patrick’s Day ceremonies have been held there. It has plants and other vegetation. Strange objects have appeared mysteriously within it – a miniature swimming pool with a diving board, a tiny Ferris wheel and a UFO.

The Occupy Wall Street movement gave the park some recognition. In December 2011, a small group put miniature protest signs and toy tents in the teeny park and held a protest (a month earlier they had been evicted from a very real park they had occupied for six weeks). One of the protesters was arrested for refusing to leave.

And now, Portland’s littlest park is getting big headlines. It started with a British sports management company called KV Events, based in Lichfield, north of Birmingham. It was promoting the “world’s shortest fun run,” around Prince’s Park in Burntwood.

The park has the Guinness title of the United Kingdom’s smallest park. It has a fence, a bench and three trees. It was founded in 1863 to commemorate the marriage of Albert Edward, Prince of Wales, to Princess Alexandra of Denmark.

Promoters Paul Griffin and Kevin Wilson decided to have some fun, launching a faux challenge to Portland’s claim – figuring that would generate publicity for the race and for the charity the race is intended to benefit.

The gauntlet was thrown down when Wilson told LichfieldLive.co.uk, a local website, that the Portland park was just a “glorified flower pot.” Griffin followed up with interviews on Portland broadcast stations.

“We understand the definition of a park to be a fenced area, usually in a natural state, possibly for recreation purposes,” Griffin said on KPAM radio’s “Bob Miller Show.”

Parks, said Griffin, are places where you can take family and friends for a picnic.

“We don’t think you can do that in your fair park,” Griffin quipped.

Portlanders have come to the defense of their Lilliputian park. Someone put a toy soldier with a bazooka in the vegetation as well as a fence – a defensive perimeter.

“We Americans have a pretty good track record when it comes to taking on the Brits. Perhaps they’re still smarting over that whole American Revolution thing,” said Mark Ross, spokesman for Portland Parks & Recreation.

Wilson says he has no intention of actually asking Guinness to take away Portland’s title. There is talk, however, of a North Atlantic alliance: A sister-park relationship between the two, whatever that might look like.