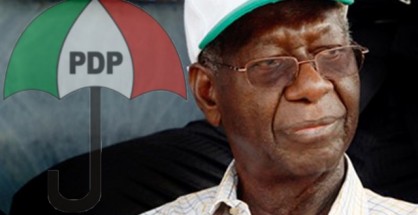 Chairman, Board of Trustees of the Peoples Democratic Party, Chief Tony Anenih, on Sunday night expressed his fear of the opposition parties’ merger before chiefs of the ruling party.

Anenih told the governors, federal lawmakers and state chairmen of the PDP from the South-South geo-political zone, in Asaba, Delta State, that the opposition political parties congregating under the All Progressives Congress banner might be a  threat to the PDP hegemony.

“We must not live under the illusion that our party is invulnerable. Although, the existing opposition parties are still too small, fragile and sectional, we must not ignore the possibility that a merger of these parties may constitute a threat to our current dominance of the political terrain,” Anenih told his party men.

The APC, an initiative of the Action Congress of Nigeria, Congress for Progressive Change, All Nigeria Peoples Party and a faction of the All Progressives Grand Alliance, has the avowed mission to dislodge the PDP from power come 2015.

Before now, Chairman of the PDP, Bamanga Tukur, had derided the merger, saying selfish ambition would create division among the merging parties.

The PDP BoT chairman also said that the opposition parties had hijacked the Nigerian Governors’ Forum hence the need for party members to rally round the PDP governors’ forum chaired by the Akwa Ibom State Governor Godswill Akpabio.

He told the gathering, “We must not labour under the illusion that we can be spectators in the bold and necessary drama of national reconstruction, or, worse still, align with those who seek power for its own sake rather than for the good of our people.

“We, therefore, have a strategic obligation to put our house in order so as to sustain the peace which we have enjoyed in the last 14 years.

“We must always be conscious that if the PDP becomes fragmented as a result of the inordinate ambitions of a few members, our country, our democracy and our people will suffer.

“We must, therefore, subsume our ambitions under the greater good of our party and our country.

“The proposed merger of four political parties under the umbrella of the All Progressives Congress (APC) appears to be a house built on sand, which is likely to collapse with the first rain. Speaking seriously, however, we cannot afford to be complacent. We must expect any eventualities and prepare to overcome them.”