But for Providence, 6 May, 2013 would have gone down in the history of the country as one of the bloodiest days of crime. The would-be perpetrators of the act are now cooling their feet in police net. How were they apprehended? 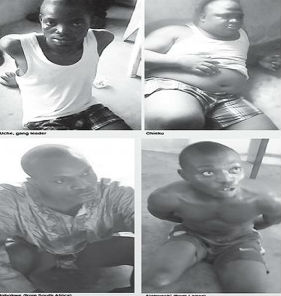 Accordinated attempt to carry out a major robbery operation in Onitsha, Anambra State was recently foiled by officers and men of the Anambra State Special Anti Robbery Squad (SARS).

Amos Chieku, Ndubuisi Uche, Chibuike Alakwachi, Ugochukwu Igbokwe and Nonso are five members of the gang currently assisting police authorities to trace the whereabouts of other members still at large.

A couple of weeks ago, one robbery informant reportedly alerted Uche, popularly called ‘I Chop’ of a planned movement of a large amount of money from Onitsha to an undisclosed destination, apparently by a group of businessmen. The amount involved was such that Uche, 31, alone could not handle.

He promptly invited some ‘tested’ hands in the act of robbery to join him in the ‘business.’ Chieku, alias Danga is based in Abuja, but moves anywhere across the country to perpetrate his crime once he is called upon.

Chieku, 23, is said to be good with guns. He is also a dependable driver. Alakwachi, 21, is based in Lagos and is reported to be a former escapee from prison for similar offence. Nonso is said to be the gang’s armourer and also good with weapons.

Whereas Chieku hails from Enugu State, Uche is a native of Amasiri Afikpo in Ebonyi State. The third member of the gang, Igbokwe is not based in Nigeria. For seven years, he has been living in South Africa.

Igbokwe, 27, and native of Owerri in Imo State, is not gainfully employed in the South African country, but he is occasionally invited home by the gang when there is a ‘business’ considered is requiring an expert touch. Igbokwe is reported to be a professional gun handler at least the kind of guns in the armoury of the Nigerian military.

He is also reported to provide foreign cover for all members of the group. It was for the foiled operation that Igbokwe flew into the country from South Africa last week. So, last Sunday, all members of the gang were scheduled to meet at a hotel in Onitsha from where they would strategise before their final assault the following day, Monday, 6 May, 2013.

Their plan was reportedly to ambush the bullion van moving the cash and intercept the convoy. It was reported that Uche, the alleged gang leader, had instructed that should there be any resistant to their action, his men should not hesitate to ‘waste’ such a person. But the news of the gang’s planned operation got to the notice of the SARS leadership, which promptly put men on alert for the gang.

While waiting for his gang to arrive the hotel, men of the SARS reportedly swooped on Uche and he was promptly arrested. But Uche would not go down alone. So, he promised that he would assist law enforcement agents to get other members of the gang.

So, the police decided to play along while Uche called his partners-in-crime to join him at the hotel. One by one, Chieku, Nonso, Alakwachi and Igbokwe all arrived to be welcome by Uche. To the chagrin of all, they landed in the hands of operatives of SARS team strategically stationed at the hotel. Some of their gang were said to still being awaited after Uche had called them that there was a slight change in time for the operation.

In their confessional statements before Saturday Mirror in Awka, Chieku denied knowledge of the planned attempt to rob that day. Though he confessed to have been an armed robber before, he said he had repented a long time ago.

He claimed he was only bringing his family from Abuja where he had accident on the way with his car. At another breadth, Chieku confessed to being a member of the gang and that it was Uche that introduced him to the ‘deal’ that led to their arrest.

“I know that the game is up, but let I Chop tell you all I know about the business. We all met Uche at Enugu before we came to Onitsha. He was the one that called me that there is business for us at Onitsha,” Chieku added. Nonso, on his part, denied being a robber, but said that he knows Uche and Chieku who used to come and eat in his mother’s canteen in Enugu.

This claim, Uche rejected. Uche, while confessing to his crime, said that all five of them were members of the same gang. He confirmed that Igbokwe flew into the country from Nigeria for the planned operation, while Alakwachi also came from Lagos for the same operation.

When Saturday Mirror asked Uche how it was possible for someone to fly in from South Africa to carry out a robbery operation and also go back to that country, Uche answered, “What are you saying?

How much is a South African ticket when you go for an operation and make N5 million or N10 million. Let me tell you that some of our gang are scattered in Lagos, Abuja and abroad. You contact those ones that you want to be in your team for a particular operation.

The claim that they are not involved in the Onitsha operation that led to our arrest are false. They will not tell you the truth. Some months back, Alakwachi betrayed me by aligning himself with a contact I gave him and I cursed him that he would soon be caught,” Uche said.

But Igbokwe’s claim is different. He said: “I deal in drugs in South Africa. I did not know that they are robbers. I just came home looking for some money to continue my business.

I wanted to dupe Chiewku N300,000, but I was roped into this case.” This was, however, also denied by Uche who said Igbokwe always come from South Africa to rob, stay some time in Lagos and travel back.

A senior member of the SARS who does not want his name in print, said that with the arrest of Uche, there would be a high degree of peace in Onitsha and the entire South East. The police officer claimed Uche has been on the wanted list of the police for a long time ago. “We have been looking for I Chop for a long time now.

There is hardly any serious robbery in Onitsha that Uche would not be part of it. He is such a notorious robber that his name even sends jitters down the spines of security men and other criminals in the state and environs,” he said.