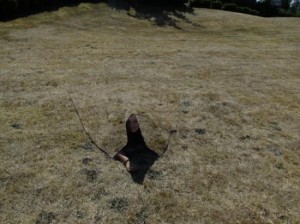 Created by Canadian camouflage design company Hyperstealth, Quantum Stealth is a is a material that renders its wearer completely invisible by bending light waves around it, which is in effect very similar to the invisibility cloak worn by child wizard extraordinaire, Harry Potter.

Wouldn’t it be nice if you could put on your very own invisibility cloak and just roam around undetected? Sadly, that’s not going to be possible for most of us, but if you’re a US soldier, this fantasy could become a reality sooner than you think. Apparently, the US Military is currently backing development of special materials to make American soldiers completely invisible on the battlefield, and according to one camouflage design company, it might soon get its wish. Hyperstealth Biotechnology Corp. CEO, Guy Cramer, says their new “Quantum Stealth” material has finally made the sci-fi/fantasy technology a reality. Unfortunately at this time, we can only take his word for it, as its development is so secret that the company cannot even show footage of how it works, on its website, offering only mock-ups of its effects.

Still, Cramer remains unfazed by the wave of skepticism, saying that “the people that need to know that it works have seen it”. And no, he doesn’t mean the students of a real-life wizard school, but command groups from within the US and Canadian Military. “‘These groups now know that it works and does so without cameras, batteries, lights or mirrors…It is lightweight and quite inexpensive.” the Hyperstealth CEO said. ” Both the U.S. and Canadian military have confirmed that it also works against military IR scopes and Thermal Optics.”

Instead of going into details about how Quantum Stealth manipulates light waves to conceal even the target’s shadow, Mr. Cramer talked about how he sees the technology being used. In his opinion, it would be invaluable for pilots stranded behind enemy lines in order to avoid capture, but also for special units carrying out raids in broad daylight. Also the next generation of aircrafts could be invisible not only to radars but also to the naked eye, while tanks and submarines could only be detected by the sound of their engines and guns.