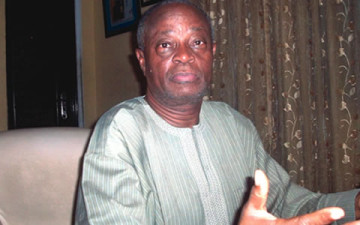 A former Minister of Works, Chief Adeseye Ogunlewe, said he regrets sending his children to study abroad and advised wealthy Nigerians to desist from the trend.

Ogunlewe, who was a minister under the administration of ex-President Olusegun Obasanjo, weekend, said he struggled to meet with the financial obligations of that decision and realized it was not worthwhile.

The Peoples Democratic Party, PDP, who is now the pro-chancellor of Federal University of Agriculture, Abeokuta, opened up on his frustrations when the institution’s Alumni Association paid him a visit in his Lagos Ogudu residence.

Mr. Ogunlewe said he had to pay his children’s tuition “through the nose” and added that the transportation cost alone for his wards was enough to see them through their education back home.

The former minister said, the reduction of tuition fees in federal institutions by President Goodluck Jonathan is a welcome development and will be a huge relief to many parents and guardians.

Mr. Ogunlewe therefore enjoined leaders and other well-to-dos in the country to desist from sending their wards abroad for academic purposes.