Taking into consideration the ephemeralness of power as a phenomenom, the vintage Shakespearian Question then arises: “To be or not to be- that is the question.” Whether to remove the tiresome toga of “Senator” and leave the name simply as “President David Mark.” Wow! 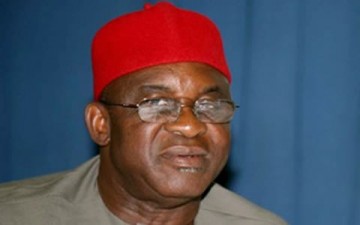 That sounds familiar. Take another look, wow!  But what do we do with the other tiresome toga, “Distinguished”? Boring, outdated; distinguished academic or what? Thousands of people both in and out of Senate bear that toga. Lets try again “Your Excellency,” wow!!! That sounds familiar. Why? Well, already that is how the Nigerian Senate President is addressed.

So how would David take over from Jonathan? Section 145 of the 1999 Constitution, if an Executive impasse arises, does the President have enough loyalists amongst the Ministers to stand firmly by him and refuse to pass a vote of no confidence?…. As was the case of his predecessor of blessed memory? Although very tempting and very easy for any Macbethan politician to invoke the relevant constitutional promulgations on impeachment and accordingly impeach the President and his Vice.

Don’t bother about impeachment; it is completely unnecessary in this instance. This is because there is an ecclesiastical analogy that cannot be ignored, given the uncanny similarities with present day happenings!  This analogy is found in the Holy Bible.  1 Samuel 18:1 And it came to pass, when he had made an end of speaking unto Saul, that the soul of Jonathan was knit with the soul of David, and Jonathan loved him as his own soul.18:2 And Saul took him that day, and would let him go no more home to his father’s house.

Then Jonathan and David made a covenant, because he loved him as his own soul.

And Jonathan stripped himself of the robe that was upon him, and gave it to David, and his garments, even to his sword, and to his bow, and to his girdle. And David went out whithersoever Saul sent him, and behaved himself wisely: and Saul set him over the men of war, and he was accepted in the sight of all the people, and also in the sight of Saul’s servants.

From all indications, there is a strong bond between President Jonathan and Senate President David Mark

Further, Senator David Mark is a son-in-law of Niger Delta just like the Biblical David who was a son in-law to the king of Israel.

Our beloved William Shakespeare of Newcastle upon Tyne, whilst pondering on the phenomenon – ‘what is in a name?’ advised us in Romeo and Juliet that ‘a rose by any other name will scent just as sweet.’ Or will it?

You see, whilst President Jonathan has a very good name- “Goodluck”-, Senate President David Mark has a remarkably excellent middle name- ‘Bonadventure’- This means that David Mark’s name is a combination of  ‘Goodluck , Victory – and  divinely guarded ‘God’s  adventure’ –Bonadventure! (Bon is the ancient name of God, from where you get pro-  Bono, or for God).Therefore, by voluntarily handing over his legislative as well as some measure of his executive appurtances to a credible contender, the President is about to unwittingly fulfill an ecclesiastical prophesy found in 1 Samuel 18:4, “And Jonathan stripped himself of the robe that was upon him, and gave it to David, and his garments, even to his sword, and to his bow, and to his girdle.”

The kingly robes and garments represent the upper and lower legislative houses (the Senate and the House of Representatives), the sword and the bow represents the President’s powers as Commander-in-Chief of the Armed Forces. But there is a twist here: David Mark is a retired military General and highly respected in military circles.

The girdle which is the Oath of Office seems to be the only point outstanding. That shouldn’t pose any problems at all. The independent Judiciary will swear in whom they have to swear in.  Doctrine of Necessity or Doctrine of Lets Move the Nation Forward. Period.

Anyway, nobody knows if, according to 1 Samuel 18:3,  Jonathan and David (have) made a covenant.  However, it is crystal clear that the President’s  actions so far can be interpreted to mean:   “David, you will be the next king of Israel (or the next President of Nigeria).

You should be dressed and armed as the heir apparent. God’s hand is on you”.  Is this David Mark’s destiny? Will he become President? Is political acquiesance equivalent to abdication?

In global politics, a leader who by his actions, advertently or inardvertently, wittingly or unwittingly cedes or voluntarily renounces his powers in favour of someone else before the legitimate expiration of his tenure is seen as having committed a political volunti non fit injuria (and should therefore not complain).

The Biblical David’s popularity both amongst the people and among the leaders is equivalent to the happenings in present day Nigeria. In political ecclesiasticism, the mien and demeanor of the man David Mark is such that he has endeared himself to Nigerians and to all those around him. In a country whose unofficial motto is to “pull down the successful”, David Mark has discharged himself creditably.

When he dons his Northern garbs he looks like a Northern Aristocrat and talakawa rolled into one; when he dons the Kalabari attire he looks strictu sensu like a man from the Niger Delta. In other words, there is a national acceptability of his demeanour.

Perhaps cultivated over the years, but encapsulated in his re-election to head the nation’s seventh National Assembly. According to the Torah: Therefore, it is fair to ask what more can he have but the kingdom?  Symbolically, the Holy Quran states that: “A people deserve the government they get”. As we were going to print someone whispered to me that Governor Rotimi Amaechi’s  middle name is also David, the heir apparent. So which of the Davids? And what year? 2015 or 2019?

Doubtful it stood like two spent swimmers…Put simply in the Latin Language, ‘Absit reverentia vero’,  simply means that: “The truth should not be silenced to spare someone”.  Put in  Ijaw language— Haaaan Ijaw!   Egberi Faaaa!

Prof.  I.DUKE , an expert in international conflict resolution,  wrote from The Vatican.