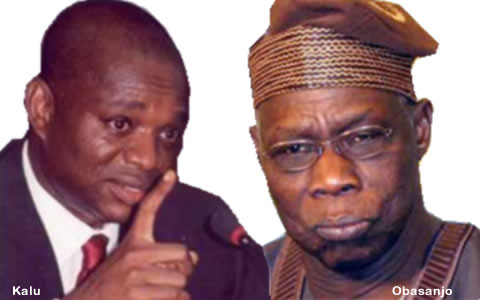 Former Governor of Abia State, Orji Uzor Kalu, has revealed how the third term ambition of ex-President Olusegun Obasanjo earned him the Ota farmer’s fury just as he said he donated N100m towards his Presidential election in 1999.

He also said he gave another N100m to the Peoples Democratic Party for its registration prior to the 1999 elections.

Kalu said this on Saturday when he featured as ‘Guest of the Week’ on a Kaduna-based Liberty FM radio programme.

He said, “I made millions before joining politics. I was doing business between Maiduguri and the East. I carried fish from Maiduguri to the East and palm oil from the East to Maiduguri. So, I had money and invested so much in the PDP.

“If the party is a company, I would have been a major  shareholder. I and (Saminu) Turaki spent more on the party than any other Nigerian. How much did (President Goodluck) Jonathan have before he became the President? I was the first to give the party N100m to register. I was also the first to give Obasanjo N100m to campaign during the 1999 election.”

On the origin of the frosty relationship between him and Obasanjo, Kalu said:

“I fell apart with Obasanjo on the issue of third term. He wanted to be a life President. Nobody can tell me that Obasanjo was not interested in a third term. Huge money was involved in the project.  Two senators from my state came with the money and I asked them to return it.

“It was the then President of America, George Bush, who genuinely derailed the third term agenda. I told Bush about it and that is why Obasanjo hates me. Bush told him that it was not possible in a constitutional democracy. I try to avoid him (Obasanjo) at public functions.”

On the 2015 election, Kalu said, “People should stop imposing the President on Nigerians. Let the people chose their President.

“Igbo are going to vote for Igbo in 2015. Jonathan has the constitutional right to run but he is not an Igbo man. There are many qualified Igbo men. I am not saying I’m running for President now but there are possibilities that other Igbo men are thinking about that. Northerners should support us for the presidency in 2015 because we supported (Shehu) Shagari. We supported (Umaru) Yar’Adau, (Yakubu) Gowon and Tafawa Balewa,”  Kalu added.

He said his return to PDP was to give the party a second chance and to see if he could make positive changes in the party.

Kalu lampooned the Security Chiefs for ill-advising the President on the declaration of a state of emergency in Adamawa, Borno and Yobe saying the declaration was nothing but a movement of troops from one place to another, adding that the President should have allowed the amnesty committee to work for at least three months before declaring emergency rule.

In his words, “I am for amnesty. The President should have allowed the amnesty committee at least three months. He shouldn’t have made any announcement. There is nothing like state of emergency but just a movement of troops. Jonathan is not that wicked to be playing politics with human life. Let’s remove politics or 2015 from this thing.”