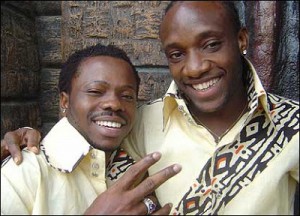 Hip hop star, Kingsley Okonkwo popularly known as K-Cee keeps pulling strong, ever since the split of KC Presh; he has surpassed every expectations and risen into such a huge star on his own, hit after hit. In this interview, Kcee talks about his new album, his  split with Presh and what transpired between him and actress Ebube Nwagbo.  Excerpt:

Who inspired you into music ?
Basically, I will say music is  something I have passion for.  I started singing  from  the church choir until I won the talent hunt show. Since then, I have been doing my thing and making my own  impact on the nation’s music scene. Music is my life , it’s  my profession and that’s what I do for a living.

What brought about the split between you and Presh?
I don’t know what people really want to know about my break up with Presh. But what I know is that we are no more doing business together  and we collectively decided to pursue solo careers after 12 years of performing as a group. That’s what we are doing now. We didn’t quarrel or beef each other. It was a joint agreement that we should pursue solo careers.   It wasn’t because of money or anything. I think it just happened that way, we never saw the break-up coming. We just had an idea to do separate albums and that’s what is happening right now.

So how did you meet Presh ?
I met him in a church choir  and we were running the choir together after which we entered for the Star Quest TV reality show together and won the show.

Now that you are no longer together , is there anything you did then that you find difficult to do now ?
Of course  yes , because formally I used to  record together with my partner and then, it’s  either am doing the verse or he’s doing the chorus.  But right now, I’m doing everything alone which is a plus and more so, I have a kind of music that people can  identify with my voice as K-Cee. So, when they hear my music, they will know its me . I think its an achievement for me to let people know my real person.

Are you trying to say that you’ve not been faced with challenges after the split ?
The truth is that  there has been one or two challenges  but by the grace of God, they are not too difficult to overcome because breaking up with your partner was not easy thing. I am trying to make  people to believe in me and in my talent.  Two years down the drain, I already have a couple of songs which my fans have come to love so much. I don’t know if I should say am missing something. But all the same, am fine.

Are you missing Presh ?
I think I’m getting more attention now than before. The attention I’m getting now is bigger than what I was getting when we were together.

…Meaning that you did not regret splitting with Presh ?
For me, I have no regret because it  was a mutual decision taken by the group to show their fans their individual genre of music. I have been working to stay on top of my game. I’m not sleeping, This is a time for salvation  because I have been working towards  this achievement. So, no regret at all .

So, how did you start working together ?
I started it. I met him at the church and I approached him. We used to be  four in the group then;myself, Presh , Domino and Emmy .Later, the other two left to pursue their dreams. At a point, Presh was no longer interested but later he came back to join forces with me.

How was life like before you got to this level ?
Of course, it has not been easy trying to do good music, and  making people happy each time they hear your muisc. You have to work and work until you get the right sound, and also,  you need the energy to push and promote your song. It is really not easy. It could be stressful and fun sometimes. But the thing is that you don’t  need to give up, you need to keep  pushing it that’s why we are alive. For me, things have not been rosy

What really happened between you and Ebube Nwagbo ?
What happened between us was nothing  more than having fun. That’s what my new song titled ‘’Limpopo ‘ is all about. It mean let’s have fun.

Any memorable experience so far ?
I always remember the day I won Star Quest TV reality show competition. It was memorable for me because it actually gave me the opportunity to express myself. Anytime, I remember that day, I always feel happy. I never believed KC Presh could win Star Quest. When we entered for the competition in 2002, after Eedris Abdul Kareem advised us to do so.

That day, I cried and people did not know why I was crying. I reminisced, recounting the experience that transformed my  life forever. The reason was that God had broken the chains of poverty in my life and taken me to a greater height. I knew I was going to make use of that opportunity because of the hunger I had exhibited while winning the competition. I couldn’t help  but to shed tears of joy. After we  got their first N1million cheque, courtesy of Star Quest reality TV show,I bought a Mercedez Benz 190. And I was cruising around town then with the new car.

How do you treat your female fans ?
Some of my colleagues get carried away when it comes to women. But interestingly, women are part of the entertainment business. Now, what matters is your ability to control them. It’s very important to you as an entertainer if you want to succeed.  When you pay some artistes for a show, they move into a hotel for the next one month blowing the money, hanging out with girls and just having fun without remembering to invest.

Like I said, my father was a DJ, so, I heard the story of other musicians first hand who made it big and then crashed later. When we started making money, we remembered to invest. We toured all the 36 states of the federation with so many brands, including Nestle, and we made so much money and the women were coming.

But we made sure we invested. Though they love me so much and I  love them too. I handle them the way they want me to handle them . That’s why I said, in my song that  I want to be your maga so they should use me as they want .

Are you still single because we heard you were once married ?
I have never married before, the person that got married was my brother but people thought I was the one. There was nothing like me having extra-marital affair or a love kid. They are all lies.

Tell us more about your Limpopo song?
Limpopo is my latest song which I did with Harry song and I did it the way I’ve been doing other songs.  It is like  a month old now. The song is already everywhere so I think its God that made it to be so and am happy about it. Also the song means lets have fun its just about me and a lady that’s all

What is the secret of your  success?
Consistency is the key. You have to be consistent, know the business and follow it up. I know people love good music all I need to do is to give them good music. Aside this,  you have to always keep renewing your face in the business and be trendy and avoid scandals that can destroy your career.

We heard you have a record label , can you tell us about it ?
Right now, am under Five Star music and its owned by E-money who is the president while I am the vice-president .

What made you and Presh think of doing collaboration with 50 Cent?
Yea , that was before I and Presh split but we didn’t do it again because the plan was between the two of us. So, when we broke up the project could not be executed.

Tell us about  your childhood ?
My growing up was not too rough. I grew up in Lagos where I had my early education. I hail from an average family.

Did your parents disagree with you over your choice of career?
Yea , my mum  then supported me while my dad was indifference. But  along the line, he started supporting me when I proved to him that music is what I want to do for a living. He  had no choice than to support me.

What do you have  for your fans out there ?
Nothing less than good music. Because for me, and my record label, we  are trying to ensure that we do  good  music. I am sure that the industry will experience  good music. We have a couple of artistes that will be coming out soon under our label with lots of good music. So, that’s what we are working on at the moment. They should expect  good music .

Where should we expect Kcee  in the next five years ?
I think from now till the end of this year, I will be more busy than ever.  As far as I am concerned,  I have a lot in stock.  I just don’t want to let the cat out of the bag, my fans should just keep their fingers crossed .  I am just starting and  I have not gotten to anywhere yet .