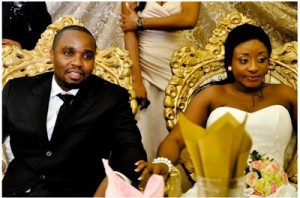 Ini Edo got married in November 2008 and it was only right for most people to expect the actress to give up acting and take up her responsibilities as a wife.

Nope, we were all wrong, after over 4 years of marriage Ini Edo is still running Nollywood and residing in Nigeria ALONE. Yes alone, while her husband is in the United States. Her husband, an America-based, but Edo State-born businessman, Philip Ehiagwina was reportedly married to a certain Ruth, who didn’t hide her contempt for Ini and even accused her of snatching her husband away from her.

After all these years of marriage, Ini and her prince charming can be hardly found in the same Time zone. Rumors have begin to circulate concerning their marriage, with the public asking the obvious questions. Most actress would either drop acting and relocate with their husbands or the other way round; but not in the case of Ini Edo and Philip.

Rumors even speculate that Ini is totally living like a single lady, going back to her old lifestyle (don’t know what that was). Meanwhile, Philips flew into Nigeria few days ago for the burial of his mother. Ini was also there. Sources say Philip will soon travel back to his base without Ini going with him AGAIN!!!