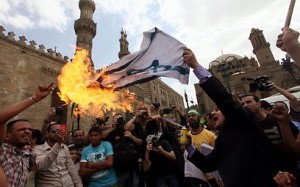 Egypt’s Muslim Brotherhood has staged an anti-Israel rally in Cairo on Friday bringing to memory anti-Jewish slurs by the Brotherhood in the past.

The rally emerged from weekly services at Al Azhar mosque with demonstrators chanting “the people want the destruction of Israel” in protest of recent Israeli airstrikes in Syria and the detention of a Palestinian Muslim cleric.

A leading member of the brotherhood, Mohammad Al Beltagy at one point during the rally took the microphone and shouted: “we will repeat it over and over, Israel is our enemy.” Others echoed the call, and one organiser whipped up the crowd in a chant urging the army to launch a war against Israel to “liberate Palestine … from the sons of monkeys and pigs.”

Since the country’s 2011 uprising that deposed longtime autocrat Hosni Mubarak, the Brotherhood – main backers of President Mohammad Mursi – known for its anti-Israeli and anti-Western rhetoric – has largely avoided showing enmity to the West or its former foe on its eastern border, but the group has now voiced out its hatred for Israel.

Mursi himself has repeatedly stressed commitment to Egypt’s peace treaty with Israel, and won US praise by brokering a cease-fire between Palestinian Hamas militants and the Jewish state just months after he assumed his post, but he has found it hard together with his brotherhood, to come to terms with responsibilities that came with his new office, and let go their longtime anti-Jewish stance.

The demonstrators were also protesting the Israeli detention of the mufti of occupied Jerusalem, Mohammad Hussain, Mehres added in comments in the official newspaper of the Brotherhood’s political party, Freedom and Justice. Hussein was held for several hours on Wednesday for questioning over disturbances at a holy site but released without charge.

The rally comes a day after Yousuf Al Qaradawi, an influential Muslim cleric and Brotherhood ally, crossed to the Palestinian Gaza Strip to join a rally held by Hamas. At the rally, Al Qaradawi voiced support for fighters who fire rockets at Israel and said the country has no right to exist.