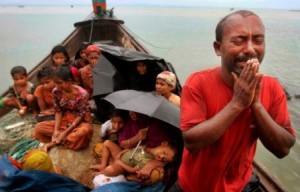 Sectarian clashes in Myanmar is getting out of hand as the offensive on Muslims continue in Myanmar.

Government has now called for calm after mobs burned down a Muslim orphanage, a mosque and shops during a new eruption of religious violence in the northeastern Shan state.

Authorities imposed a curfew late on Tuesday in Lashio, about 700km northeast of Yangon, after a mob of 200 local residents surrounded the city police station demanding they hand over a Muslim detainee.

Nay Win, 48, a Muslim from a nearby township, was arrested after allegedly setting fire to Aye Aye Win, 24, a Shan Buddhist, earlier in the day after the two had an altercation at a petrol station, Lashio police said.

“He is not from here and we don’t know why he did this,” local resident Maung Win said of Nay Win, on whom police allegedly found two methamphetamine pills.

The woman was admitted to hospital.

“According to witnesses, she was not burned seriously but has injuries on her face and arms,” Sai Sam Min, a member of parliament from Lashio, said.

“We imposed the curfew at 9pm (14:30 GMT) on Tuesday to control the angry mob which included Buddhist monks,” a police station spokesman, who asked to remain anonymous, said.

“A mosque and a religious school and some houses were destroyed by the mob, but there were no deaths or injuries.”

Myanmar’s recent sectarian violence has been partly blamed on the 969 movement, launched in February by an extremist monk in Mandalay named Wirathu, who encourages Buddhists to shun Muslim-owned shops.

“Since the riots in lower Burma, this 969 movement has been sending their people up to the towns in Shan state for a month or two,” Khuensai said.

“They have been trying to stir up trouble for a long time, so this was an opportunity for them.”

There are less than 2,000 Myanmar Muslims living in Lashio, Khunesai said, of the city’s estimated population of about 130,000.

The Lashio incident was the third outbreak of anti-Muslim violence to flare up in Myanmar this year.

On April 30, in Oakkan, about 100km north of Yangon, Buddhists went on a rampage after a Muslim woman allegedly bumped into a monk, breaking his begging bowl.

One Muslim man was killed, and a mosque and 77 houses were set on fire.

In March at least 44 people were killed in sectarian strife in in Meiktila, 450km north of Yangon, where at least 8,000 people, most of them Muslims, were left homeless in riots sparked by an apparent row at a Muslim-owned gold shop.