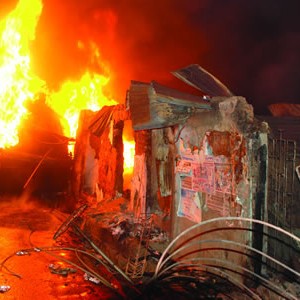 A recurring fire in Gurgeldi, Misau, Bauchi State, has destroyed some 60 houses, according to residents.

The District Head of Misau, Alhaji Ahmadu Ahmadu, said that the fire, which started from a house three weeks ago, had been spreading from one house to another and blamed the fire on an evil spirit just as he said that efforts to put it out using water and sand had been futile.

The district head said that the Misau Emirate Council had assisted the victims with N40, 000, while a prominent son of the area donated N100, 000.

The first victim of the fire, Malam Bappa Jika, noted that the blaze started from his parlour.

“We made attempts to put out the fire using ordinary water but to no avail. In subsequent days, other houses in the neighbourhood had the same experience.

“Sometimes, the fire will ignite several times in either a single house, or different houses, occurring intermittently for over 60 times within the past three weeks,” he said.

Another victim, Hajara Adamu, said that as she and others were trying to put out the fire in Jika’s house, she noticed thick smoke from her own house too but before anything could be done, it went out of control.

A cleric, Malam Mohammed Manga, who was invited to intervene with prayers, said that he had to recite some verses of the Holy Quran each time there was a fire before it could be extinquished.

The Vice Chairman of Misau Local Government Council, Alhaji Yerima Lamido, confirmed the incidents, and described the fires as “surprising and alarming”.

He said that more than 100 people had been affected and that the list had been sent to the state government for assistance.

Lamido said Governor Isa Yugada had promised to send a team of experts to assess the extent of damage.

“We have made contacts with the victims and I can confirm to you that the incident is mysterious in nature. We have been advised by the residents not to take any relief materials there for now as similar assistance from individual were burned by the same fire,” he said.

The officer in charge of Azare Fire Station, Malam Ubali Sa’adu, said his office had heard of the incident but that no formal report had been lodged with it.

He said that although they were informed that the fire had some spiritual undertone, fire fighters from his office would have gone to the town if the matter had been reported.