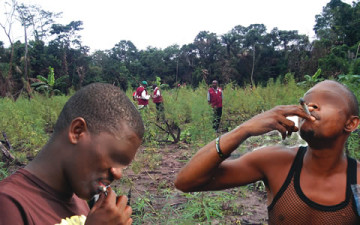 The National Drug Law Enforcement Agency, NDLEA, has dragged one Jude Ugwu, a post graduate student of the Enugu State University of Science and Technology (ESUT), to the Federal High Court sitting in Enugu for hemp smoking.

The counsel to the plaintiff, Mr Uzoamaka Anigwe, said Ugwu was caught by the operatives of the NDLEA smoking Indian hemp around the Okpara Square axis in Independence Layout while standing alone.

Anigwe said that when he was sighted by a patrol team of the NDLEA, the accused made to run away.

“Luck ran out on him when he was tracked down by the patrol team. The point that my learned colleague was canvassing as regards to the accused waiting for paper materials for his post graduate studies is baseless and a calculated attempt to deceive the court in granting him justice.

“We are here with some Indian hemp recovered from him when he was caught. I will be glad if this honorable court can convict him to serve as a deterrent to our youths who have decided to engage in drug abuse instead of being useful to themselves,” he said.

The counsel to the accused, Mr Francis Ajagu, said his client was arrested on March 30, 2012 where he was waiting for his cousin, Mr Emeka Ike, to collect some paper materials from him for his assignment.

“My client was never caught with Indian hemp and neither was he caught smoking Indian hemp.

“It was surprising that before the arrival of Mr Emeka Ike who was supposed to hand over the materials to him, the operatives of NDLEA have whisked my client away to their office without listening to his own side of the story.

“Here with me is Mr Emeka Ike who my client was waiting for; he is here before this honorable court to testify on the alleged accusation of Indian hemp smoking.

“It will be a victory for the Nigerian judiciary and the rule of law if my client can be discharged as soon as possible,” he said.

Justice D.V. Agishi said the court had listened to the arguments and adjourned the case till Aug. 2 for further hearing and cross examination. (NAN)