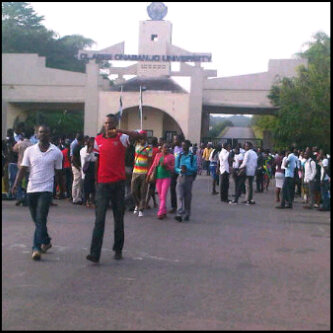 Contrary to widely circulated news reports that two students of Olabisi Onabanjo University in Abeokuta were shot dead by anti-riot policemen during a protest earlier today, the Ogun State Police has emphatically denied that any students were killed.

The Police Public Relations Officer, Muyiwa Adejobi, disclosed that while the police was called in to restore order at the university after students there began rioting over school fees, “The operation restored order to the school without a single bullet fired”, he said.

Meanwhile, a government source has cleared the air on the photo of a dead student purportedly killed by the police today, saying it came from a gang-related violence yesterday in Sagamu area of the state.