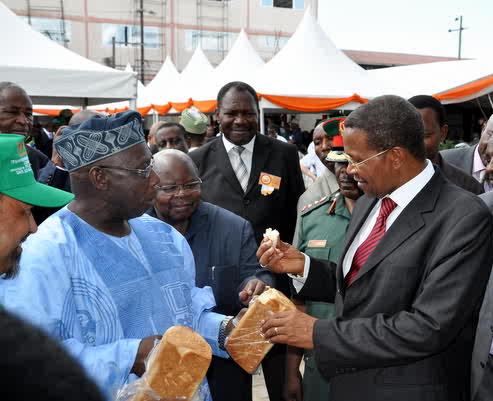 Former President, Olusegun Obasanjo has begun a mission to export Nigeria’s innovation in bakery – Cassava bread, to other African countries as he recently took the bread to Tanzania where he publicly broke bread with the President of the United Republic of Tanzania, Mrisho Jakaya Kikwete.

Tanzania’s former President, Benjamin Mkapa also ate the bread for the first time. The leaders commended the innovation, noting that it would bring several benefits to the continent.

The 40 per cent cassava bread initiative was first developed by the International Institute for Tropical Agriculture, IITA, Ibadan, as part of efforts to boost the utilization of cassava and improve local content.

President Kikwete after inaugurating the IITA Science Building in Dar es Salaam on Monday commended IITA for the bread technology, saying that the bread had an “excellent” taste.

“There is no difference between this bread and the normal bread we are used to,” he added.

Obasanjo, a goodwill ambassador for IITA,  encouraged the Tanzanian President to promote the use of cassava in confectionaries in his country to transform agriculture. He noted that the use of cassava flour in bread would stimulate the demand for the root crop, create jobs and, more importantly, make farmers proud.